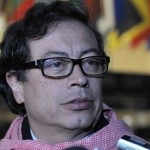 Without commenting on the ruling made by Inspector General Alejandro Ordoñez that ordered the removal of Petro from office, the letter asked for observations about the current disciplinary process taking place against Petro, judicial resources in relation to the case against the mayor, and the state’s position on the case.

The IACHR became involved in the case when Petro brought a lawsuit against the Colombian government to suspend the Inspector General’s decision by claiming inhumane treatment and political rights violations.

On Dec. 9, 2013, the Inspector General announced the dismissal of Bogota’s mayor, barring him from public office for 15 years, over “irregularities” during the transfer of the city’s waste collection to a public service.

Since the left-wing mayor’s dismissal, thousands have rallied across the country in protest of the Inspector General’s decision.

Organizers expect some 140,000 people to take to the streets in Colombia’s capital Bogota on Friday.

The decision to dismiss the mayor has received criticism from abroad including remarks from the incoming U.S. Ambassador to Colombia who said it may hinder peace talks by creating distrust among the country’s largest leftist rebel group the FARC.

Petro remains in office while his appeal is being worked over by the same Inspector General who ousted him from his position.