‘I arrived in Colombia with no job, no Spanish and no friends

Why I love living in… Medellín, Colombia 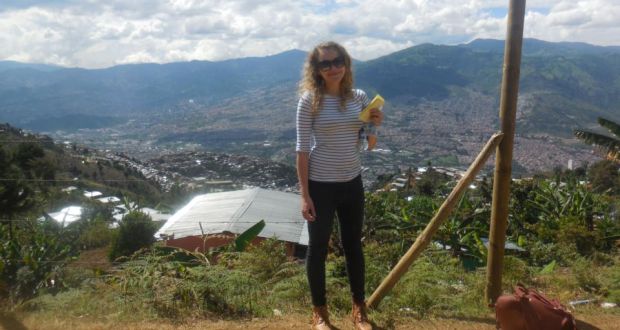 Fiona Dolan: ‘They are truly happy to see foreigners visiting what, less than 20 years ago, was the world’s most dangerous city, home to Pablo Escobar and his infamous drugs cartel.’

In September 2014 I arrived in Medellín in Colombia with no job, Spanish language skills or friends. Eight months later I have gained all of these and so much more.

I have always loved to travel, and to my family’s frustration, tend to choose locations a little off the beaten track. Someone had told me Colombians spoke the clearest Spanish in South America, and so after a small bit of internet research I came across Medellín, the “City of Eternal Spring”. I was set.

We Irish are known for our friendliness but the Colombians truly put us to shame. My Spanish has progressed quickly, mostly because of locals’ constant encouragement and patience, even at the beginning when I mostly communicated by pointing and trying to make Spanish words sound English.

The beautiful weather means that the streets are constantly full of people socialising, playing music, doing a bit of spontaneous dancing or just watching the world go by. They are truly happy to see foreigners visiting what, less than 20 years ago, was the world’s most dangerous city, home to Pablo Escobar and his infamous drugs cartel.

The pace of change here has been remarkable, mostly due the fall of the cartels and investment in infrastructure and services. In 2013, Medellín was named the world’s “most innovative city” and is constantly hailed internationally for its remarkable turnaround.

It has a metro and cable car, neither of which the capital Bogotá has, and even a set of outdoor escalators going up a mountain to serve one of its poorest and most marginalised communities. Areas whose residents were previously unable to leave their homes after 5pm have been reinvented, with top class libraries and educational spaces free to all.

Another thing that always strikes me is the incredible entrepreneurial spirit of the city’s residents. People sell all sorts of things on the street, and most bus rides are given a soundtrack by a singer, rapper or accordion player looking for tips. ]

You won’t be bored in the all too frequent traffic jams either, with people at the lights dancing, juggling, eating fire or even walking across tight ropes in the hope of some spare change. I have gambled for the first time in my life here, on a guinea pig race in the middle of a busy street organised by its entrepreneurial owner.

That’s not to say life is easy for most of Medellín’s inhabitants. I work in a private school, and am very aware that the quality of education my students receive is incomparable to that of most public schools. People work extremely long hours just to make ends meet, and not always in the safest of conditions. Prostitution is rampant including, horrifyingly, child prostitution, which is fuelled by foreign tourists.

Medellín is also home to many of country’s five million dezplacados, people who have been displaced due to 50 years of internal conflict. A brief glance while ascending in the cable car gives you a snapshot of these people’s lives, with families living in crowded and unsafe housing, totally inadequate for the storms that Colombia’s rainy season brings.

I’m trying to avoid the tired “poor but happy” cliché which tends to do nothing more that romanticise poverty, but from what I’ve experienced, many Medellín people live life with an immense joie de vivre and lightness of spirit that can often be lacking in Ireland.

Being away from home can be difficult at times, but the experiences I have had, the things I have learned and the friends I have made here in Colombia I would never exchange.

This article was received as an entry into the Generation Emgiration “Why I love living in…” competition, which closes this Saturday, June 6th. For more information on how to enter, click here.