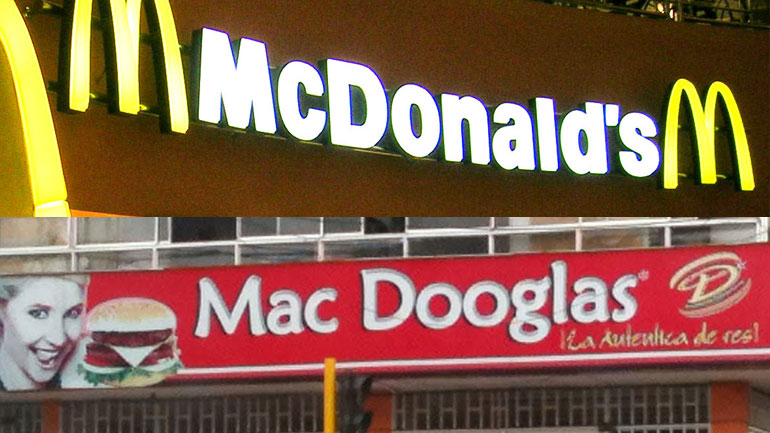 Colombia’s Mac Dooglas fast food restaurant is forced to re-brand after being sued by McDonald’s. However, the tiny restaurant chain did not go down without an epic fight against one of the world’s largest corporations.

Mac Dooglas is a fast food vendor owned by Douglas Salazar. The family business began with a modest establishment in the center of Ibague, a small city in central Colombia. The shop was successful and they expanded to set up shop in two other locations in the city.

However, the success of the tiny Mac Dooglas did not escape the attention of omnipresent McDonald’s who launched an attack on their Ibague competitor.

The David and Goliath battle between the burger brands came to the country’s attention in 2013 when the Superintendence of Industry and Commerce (SIC) confirmed the registration of the Mac Dooglas brand despite a challenge from the heavyweight McDonald’s.

McDonald’s did not accept defeat lightly and their lawyers took the case to the country’s State Council.

Representative for the colossal McDonald’s, Alvaro Correa, claimed that the brand was famous in Colombia and protected by trademark law. The mammoth multinational corporation sought protection to avoid confusion with other brands like that of Salazar.

The distinctiveness of the prefix ‘Mc’ was proved in a study by Yanhaas Advanced Market Research. The State Council spotted significant similarities between the orthography and phonetics of McDonald’s and Mac Dooglas and that both companies provided a similar service to the same type of consumer in the same market.

Therefore, the Council declared that confusion could be caused between the two contending brands, potentially affecting the reputation of McDonald’s in Colombia.

McDonald’s was announced victorious and the re-branding of Mac Dooglas was decreed.

Mac Dooglas are ordered to change their branding and advertising and will have to register a new name with SIC to keep their business alive and their 22 employees in work.

The owner of Mac Dooglas said that the decision is “unjust”. Salazar claimed that the verdict damages independent Colombian business and favors huge multinational corporations.

Salazar, who has the support of Ibague’s residents, stressed that he never wished to copy the fast food giant, on the contrary, he always sought to exceed McDonald’s in flavor and quality.

The vanquished Douglas Salazar said that his is a family business, named accordingly, and that this situation was his mother’s fault for baptizing him Douglas even though he had never liked the name.