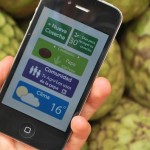 A new home-grown Colombian app is helping farmers in central Colombia to check weather, get market prices and most importantly, connect with potential clients for their agricultural products.

Cultivando Futuro co-founder Alexander Santana told Colombia Reports on Tuesday the company has grown in just a few short months from a concept born in an idea-pitching competition at the end of August.

“We came up with this idea at [‘Startup Weekend, English Version’] partly inspired by the farmers strikes that were sweeping Colombia at that time.”

“We saw these farmers using Twitter and Facebook to get their political message across using mobile technology. So we wanted to build technology that would help farmers to find new markets.”

The idea is relatively simple: Farmers use a smart phone to connect with restaurants and wholesalers at the other end of the supply chain.  This direct connection allows farmers to cut out the ‘middle man’ and market their goods directly. They also receive live weather updates and commodity prices.

Santana says access to technology remains a bottleneck, but Cultivando Futuro is working with the Ministry of Information Technology and Communications to increase internet and smartphone access in the regions.

MORE: Colombia broadband connections up almost a quarter in a year: Report

After the competition, Santana and others in his team used their contacts with farmers, agribusinesses and government officials to grow a business that is now helping farmers in the Colombian farming states of Boyaca and Cundinamarca, close to Bogota, where the company is based.

“In this moment, we are testing with 20 farmers in Guatavita, a little town in Cundimarca [state in central Colombia].  By the end of the third month from now we think we will have 300-500 farmers we can contact with market.”

The app is one of many emerging from Colombia’s start-up scene that are trying to meet a social need. Bogota start-up Aflore is trying to help and mobile app Tappsi is trying to make it safer and easier to take a taxi in Bogota.