TODAY COLOMBIA – Hilton has partnered with Colombian construction company Constructora Colpatria on a franchise license agreement to build the new multi-million hotel Hilton Medellín. According to the U.S.-based hospitality leader, the 25-story, 206-room development is scheduled to open in mid-2019. 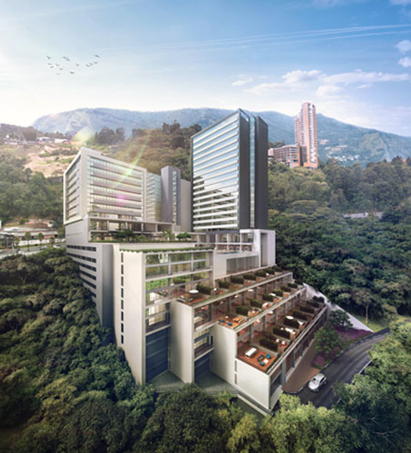 The property will be located on Avenida de las Palmas near the upper-class El Poblado neighborhood in Colombia’s second largest city. The company says Hilton Medellin will be part of a mixed-use development that also includes retail stores, office space, a residential complex, and a parking garage.

Juan Corvinos, a regional managing director of development for Hilton, highlighted the influx of multinational companies coming to Medellín, now a “sought-after location,” as something that will make the new hotel a draw for social and corporate events. “This is an excellent time to bring the Hilton brand to Medellín as its lodging market continues to experience healthy growth and the city further establishes itself as one of Colombia’s principal business hubs,” said Corvinos.

Hilton Medellín, which will be a part of the company’s global Hilton Honors loyalty program, will feature more than 2,000 square meters of meeting space, including a 600-square-meter ballroom and five other meeting rooms. It will also have an executive lounge, piano bar, restaurant, fitness center, spa, beauty salon, outdoor pool, and whirlpool.

The hotel will be owned and developed by Constructora Colpatria, which has offices in Mexico and Peru and has developed commercial, residential, retail, and infrastructure projects throughout Colombia over the past four decades.

Hilton Medellín is now one of the nine projects that Hilton currently has in the works in Colombia on top of the 14 properties it already maintains in the country. In 2016, the company opened the DoubleTree Bogotá, Hampton Inn by Hilton Medellín, and Hampton by Hilton Bucaramanga.

“The city of Medellín is an increasingly important an international business hub and we are excited to bring the first Hilton hotel to the market, benefitting the growing number of business travelers,” said Amparo Polania, president of Constructora Colpatria.

QCOLOMBIA - Sexual activity in Colombia had negative effects as a...
Read more