Attacks by left-wing rebels on Colombia’s oil pipelines have increased more than five-fold since 2010, and are up from 2012, amid slow-moving peace talks. 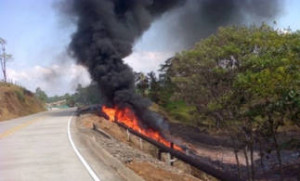 Despite this, ACP President Alejandro Martinez Villegas said 2013 had been a “good year,” owing to a seven percent increase in production compared to 2012, taking the country’s oil output to just over one million barrels per day.

As well as targeting oil infrastructure, the FARC have recently caused havoc by attacking electricity supplies, cutting off 300,000 people’s energy in the southwestern department of Nariño in October. On December 11, the rebels declared there could be an uptick in attacks before a temporary ceasefire scheduled to take effect on December 15.

Attacking key infrastructure has long been a tactic for Colombia’s guerrillas, especially in the past decade since US aid and depleted rebel numbers have reduced the FARC’s capacity to engage in conventional warfare against security forces. Oil pipelines are a particularly inviting target because they are extensive and difficult to protect, and the attacks inflict significant economic damage both on state resources and direct foreign investment.

The attacks can be viewed in various ways. First, the increase in attacks could be seen as marking an increase in the FARC’s capacity. Second, given the surge in attacks seen since 2012 — when a peace process began between the FARC and the government in Havana, Cuba — it could also represent a show of force aimed at maintaining leverage at the negotiating table.

So far, the two sides have reached agreements on two of six items on the agenda, striking a deal last month on the difficult issue of political participation for the FARC. Negotiations have now turned to the fourth issue, drug trafficking, after the parties agreed to postpone talks on the troubling issue of transitional justice.

The unilateral ceasefire announced by the FARC will be the second observed since the beginning of the talks. For his part, Colombian President Juan Manuel Santos has consistently refused to consider a ceasefire until negotiations are complete and a peace deal is signed.