TODAY COLOMBIA NEWS – Top officials in Colombia have recognized a phenomenon that has become increasingly apparent to observers of the FARC peace process: criminal groups are taking control of areas abandoned by the guerrillas. 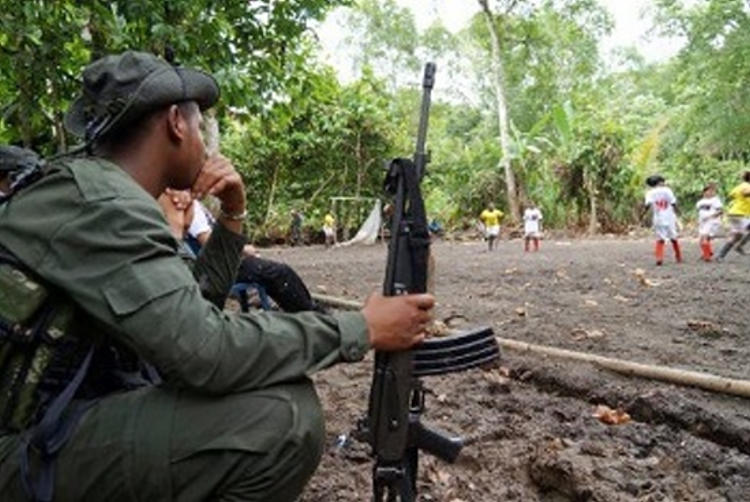 “We have seen how, in different areas of the country, illegal armed groups are seeking to fill spaces the FARC are leaving behind as they move to the zones where they’re concentrating,” Colombian President Juan Manuel Santos said on November 19.

“We’re observing on the ground that there are many neo-paramilitary criminal groups entering various parts of the country,” Howland said at a press conference.

He explained that behind this incursion is the Revolutionary Armed Forces of Colombia (Fuerzas Armadas Revolucionarias de Colombia – FARC) guerrillas’ ceasefire with Colombian forces, and their movement to “pre-concentration” zones, where they are waiting for a final peace deal with the Colombian government to be officially implemented, El Espectador reported.

“The FARC are gathering and leaving behind power vacuums, while illegal economies have yet to be replaced,” Howland added.

It is becoming increasingly clear that criminal groups are expanding to absorb the FARC’s illegal economies and territorial control.

Santos and the international representatives reiterated the urgency of implementing a peace deal as soon as possible. A new agreement with the FARC guerrillas was forged after an initial deal was narrowly rejected by popular vote in early October, but it still needs to receive legal approval before it can come into effect.

“The agreements were well conceived to stop the entry of these groups,” Howland commented. 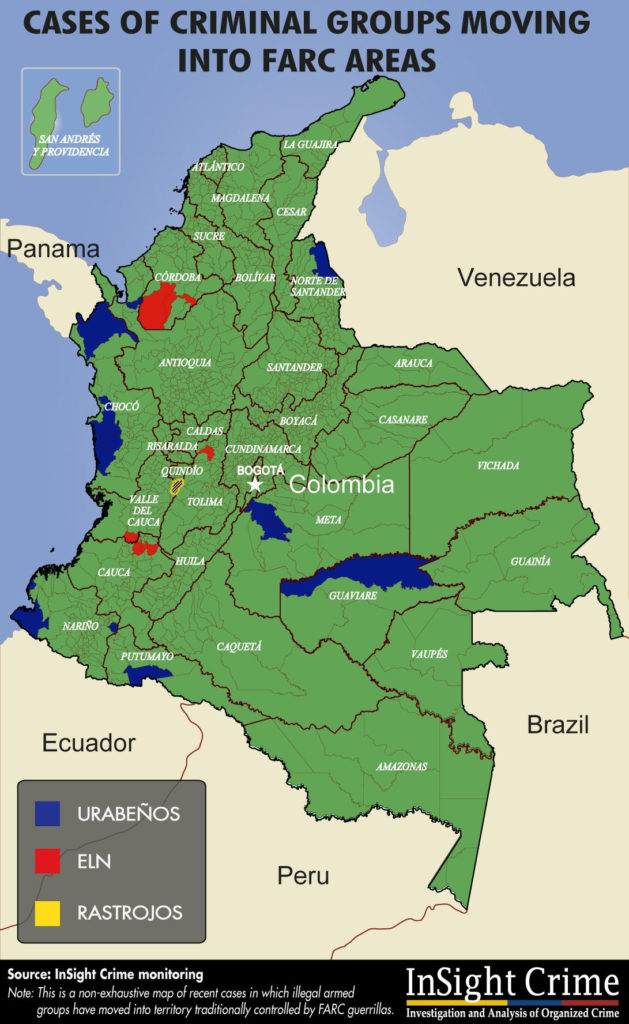 There has always been a high risk of Colombia’s criminal landscape suffering a violent shake-up with the departure of the FARC guerrillas, who have strong links to the illicit drug trade and are heavily involved in extortion. But the unexpected stumbling blocks the peace process has had to face may be exacerbating this turmoil.

It is becoming increasingly clear that criminal groups are expanding to absorb the FARC’s illegal economies and territorial control. (See map below)

This can be seen in the port city of Tumaco, a major area for coca production. The Urabeños, widely considered to be the most powerful criminal organization in Colombia, are strengthening their power in the city as local FARC factions relinquish control. In addition, a criminal group that had been working with the FARC in the region — and that has been referred to as a FARC militia — recently broke away from the guerrilla organization to continue trafficking drugs. The group has reportedly established an alliance with the Urabeños. This could be just one example of FARC members forming dissident groups to avoid demobilization.

Meanwhile, Colombia’s turbulent Eastern Plains — extensive lowlands home to a multitude of guerrilla and criminal factions, and a hub for drug trafficking — have also been targeted by the Urabeños, apparently upon orders from the group’s top commander.

In other traditional FARC areas, multiple groups that were already present are strengthening their control, leading to violent clashes. For example, the FARC, ELN and Urabeños have an established presence in the gold- and coca-rich municipality of El Bagre. But a years-long alliance forged between the FARC and the Urabeños seemingly fell apart in 2015. The FARC and ELN later joined forces to battle the criminal organization. Chocó department has also seen both the ELN and the Urabeños fight for control of FARC territory, causing mass displacement.

Another ongoing dynamic is the alliance between ELN and FARC factions. In areas of Antioquia, Chocó and Norte de Santander, the FARC is believed to be shifting fighters and/or control of criminal economies over to the ELN. This would allow FARC members to retain some local power after demobilizing, as well as provide a safety net should the guerrillas’ peace process fall through.

Implementing the new peace accord as soon as possible should mitigate the risk of a recycling of violence by setting in motion rural development initiatives in areas that are heavily dependent on activities such as coca farming and illegal mining. It would also begin the process of FARC members making the transition to civilian life.

In the meantime, however, the FARC will be increasingly tempted to return to their illegal economies, and the bilateral ceasefire will grow ever more fragile.