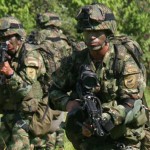 A new military force has arrived in the western state of Choco to increase security in the troubled Pacific region, Colombia’s military announced on Wednesday.

According to a press release, the new brigade consists of 2,500 soldiers and is in charge of some 22 municipalities in Choco and two in the neighboring state of Antioquia.

The main objective of the Titan Joint Task Force is to confront the FARC’s 34th and 57th front, and units of other illegal armed groups like the EL:N and Urabeños that are active in that area.

Additionally, the new brigade has been assigned to combat drug trafficking near Colombia’s border with Panama and prevent other criminal activities like illegal mining, kidnapping and extortion.

Several communities in the area have recently been displaced due to illegal mining activities by rebel forces and other criminal groups.