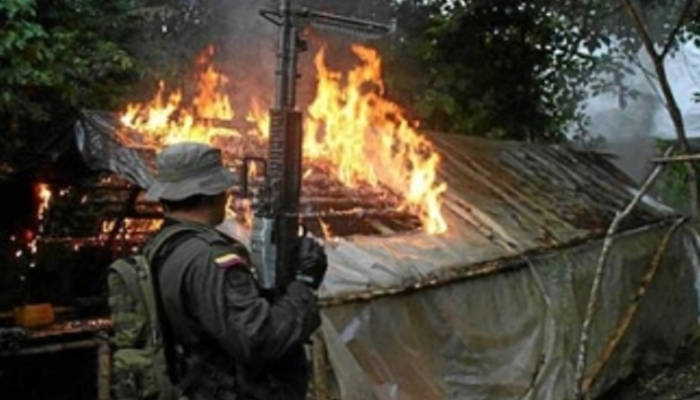 Peace talks between the FARC guerrillas and the Colombian government have turned to the issue of drug trafficking, representing a historic opportunity to tackle the illegal narcotics trade, although one fraught with obstacles to both striking and implementing an agreement.

On November 27, negotiations between the Revolutionary Armed Forces of Colombia and the Colombian government resumed in Havana, and with both sides agreeing to postpone the thorny issue of transitional justice, and move onto the next point on the agenda: the drug trade.

The government’s lead negotiator Humberto De la Calle announced the ultimate aim of any agreement would be a “Colombia without coca.” De la Calle said this will require improved coca substitution programs for farmers carried out in conjunction with the plans for agrarian reform agreed with the rebels during the first round of negotiations.

However, De la Calle added that talks will not only focus on coca cultivation, but also on the processing and trafficking of cocaine, and the FARC’s role in the drug trade.

According to sources consulted by El Espectador, any deal will require a commitment from the guerrillas to leave behind the drug trade and hand over the coca plantations and drug trafficking routes under their control.

In contrast, the FARC’s lead negotiator Luciano Marin Arango, alias “Ivan Marquez,” called for a distinction between coca and cocaine. Echoing the rhetoric of Bolivian President and coca advocate Evo Morales, Marquez said, “If we agree that coca is not the same as cocaine, then it is clearly illogical that to put an end to the problem of drug trafficking we must eradicate a plant that bring benefits to humanity.”

Marquez also called for the legalization of drug consumption and the use of legal drug sales profits to be directed into treatment for problem consumers, which, he said, would end the “pretext” for the US government’s “criminal actions against the Colombian people.”

The FARC have a love/hate relationship with drugs. Without drug trade profits, the guerrillas would not have been able to build themselves into the region’s most fearsome insurgency, nor could they have survived the military assault of the last decade. However, they recognize the corrosive and corrupting power of the drug trade, which not only affects Colombian society and institutions but also the guerrillas themselves.

This is the main reason why the FARC is not a drug cartel, even though it is in their power to be one. The ruling body of the FARC, the seven-man Secretariat does not directly manage drug trafficking operations. Instead, these are mostly handled by local Front commanders, allowing the top leaders to maintain a degree of deniability to back up their contradictory discourse.

Nevertheless, the FARC are one of the most powerful players in the Colombian drug trade, controlling not only much of the country’s coca cultivation, but also a large proportion of marijuana production, as well as cocaine processing facilities and trafficking routes. The chance of striking an agreement with such a key member of the drug trafficking underworld offers the Colombian authorities an unprecedented opportunity.

And this is clearly recognized by the government. In a speech made to the United Nations General Assembly in September, President Juan Manuel Santos offered delegates a vision of the possibilities that an agreement with the FARC on the drug trade could create.

“If we manage to get the guerrillas, once they’ve demobilized, to change sides and become an ally of the state to curb drug trafficking and end illegal crops, just imagine what it would entail,” he said.

The two sides have a surprising amount of common ground. Both the FARC and Santos have expressed a desire to move beyond the current prohibitionist paradigm, and begin to examine the issue of drugs from a health rather than criminal perspective. Both have also suggested that legalization of drugs is something that should at least be considered.

Both sides also appear to be drawing closer on the issue that is perhaps most in the guerrilla’s power to address — coca cultivation. The FARC are the custodians of much of Colombia’s coca plantations, and their snipers and landmines are the main obstacle to manual coca eradication. This, along with US pressure, is one of the main reasons Colombia continues to be the only country using the highly controversial method of aerial fumigation with industrial strength weed killer. If the FARC were to demobilize, then one of the most contentious aspects of Colombian drug policy could finally be resolved.

However, to truly bring the guerrillas onside in moving away from coca cultivation, the government will have to demonstrate it can offer coca farmers a genuine alternative. Crop substitution programs have failed miserably in the past, largely because the lack of development in coca growing areas makes moving legal produce to market in an economically viable way a near impossible task. To overcome this, the government will have to commit to development projects such as road building, as well as the agrarian reform discussed in the first round of talks.

The most recent comments by negotiators also highlighted what could be a key difference. While the FARC now look set to push for a Bolivia style “coca yes cocaine no” policy, the government seems determined to end coca cultivation. Given Santos’ reformist stance on drug prohibition, it seems surprising he would not be open to the idea of making a distinction.

However, always the hardline pragmatist, Santos will be aware of the drawbacks to this approach. The first is that traditional coca use is not as widespread in Colombia as it is in Bolivia so any legal market would struggle to absorb the coca produced. The second is that any policy change will have to be approved or at least accepted by the United States. Colombia remains one of the key allies of the US, which has invested heavily in coca eradication in the country, and unlike Evo Morales, Santos will not be prepared to sever cooperation over the issue.

There are also several other areas where the two sides will struggle to reconcile their differences. One of these relates to the FARC admitting the full extent of their interests in the drug trade, which may be an open secret but it is still one they are unwilling to confess to as it undermines their ideological credibility.

Any agreement on the issue will require the FARC to not only commit to leaving the drug trade behind but also to disclose fully the extent of their drug operations and relinquish control of their substantial narco-assets.

The government too may have some face some uncomfortable truths. In his statement, Ivan Marquez reeled off a list of questions the rebels want answered, and given what the government is demanding of the FARC, it is within the guerrilla’s power to get these answers. Among the questions were some that have haunted Colombia for decades and reach into the upper echelons of the country’s political and social elite: Did the infamous police “Search Bloc” that hunted down Pablo Escobar collude with paramilitaries and the Cali Cartel? Did ex-President Alvaro Uribe play a role in the expansion of the cocaine trade during his time as director of Civil Aviation? How many presidents, congressmen, governors and mayors have been elected with drug money?

If the FARC are to abandon the drug trade, they are also likely to demand another condition that could bring Colombia into conflict with the United States. Most of the FARC leaders are wanted in the United States on drug trafficking charges, and they are likely to demand guarantees they will not be extradited to face these charges if they demobilize.

Even if the FARC and the Colombian government overcome these problems and strike an accord, there remain serious obstacles to the implementation of any deal as there remains a high possibility that breakaway factions of the FARC will refuse to cede control of their drug trafficking operations.

If ideological diehards decide to continue in arms then retaining a stake in the drug trade would be their best option for financing their struggle. On the other hand, some of the fronts most deeply involved in drugs may well be unwilling to walk away from such lucrative revenues, and will instead focus entirely on criminal activities.

If a final peace deal is struck, it will not be difficult to convince the ideological core of the FARC to walk away from the drug trade — as long as the conditions are right — and this represents a golden opportunity for Colombia to make unprecedented progress in an issue that has ravaged the country for three decades. However, there is a long way to go before the rebels’ conditions are met and even if an agreement is struck, history has shown that when it comes to the drug trade, that there is always someone ready to fill a gap in the world’s most lucrative illegal market.