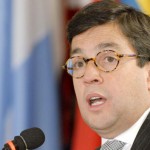 Representatives from three of the largest global economic institutions used President Juan Manuel Santos’ ongoing visit to the United States as an opportunity to publicly praise Colombia on the model it has adopted for sustained economic growth.

Speaking for his fellow colleagues, IADB President Luis Alberto Moreno stressed that during 2012-2013, the Colombian economy grew at an average annual rate of 4% , while inflation and unemployment reached the lowest levels in 20 years.

In the last month, the three major funding and economic regulation bodies have praised Colombia for its business-friendly environment, tax reform initiatives and focus on innovation.

The World bank said Colombia is the third best country in Latin America for doing business, in a reported published at the end of October.

Assessing the country’s progress so far, two separate IADB experts have said Colombia needs to transition into a knowledge-based economy with strong investment in human capital and innovation, along with the development of modern, efficient infrastructure and institutions.