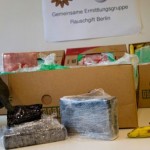 Employees of a supermarket in the German capital of Berlin found 140 kilos of cocaine in banana boxes that arrived from Colombia , local press agency DPA reported on Monday.

The seven banana boxes were part of a large delivery of 1150 boxes that were distributed to different branches of popular supermarket chain Aldi Nord around the metropolitan area of Berlin.

According to German authorities, the discovery was a total coincidence, assuming that the suspects committed a “logistical error” as apparently they were not able to get a hold of the drugs before the boxes left the port of Hamburg.

While the suspects who sent the drugs and their final destination remain unknown, authorities estimated the street value of the cocaine around $8.1 million, making it the largest cocaine seizure since 1999 when 330 kilos were found also in Berlin.

The post Germany’s largest cocaine haul in a decade was sent from Colombia appeared first on Colombia News | Colombia Reports.