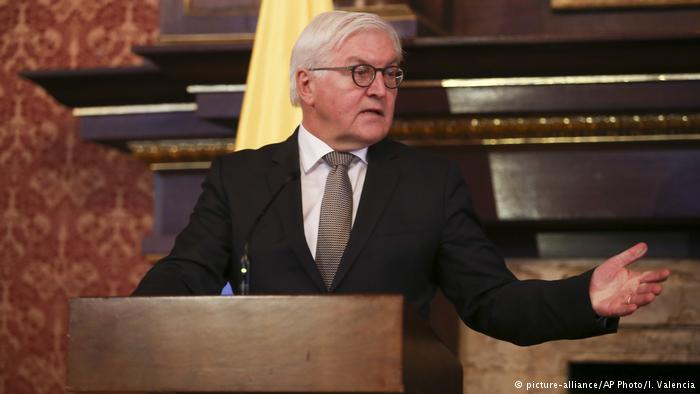 During a visit to the Colombian capital, Bogota, German Foreign Minister Frank-Walter Steinmeier on Friday praised the efforts of the Colombian government to bring an end to the decades-long conflict between the state and the guerrilla organization FARC.

“The country has written history,” Steinmeier said as he presented the concept of the “CAPAZ” German-Colombian peace institute.

“I hope that here, in the field of peace research, findings will emerge that can be fruitful for other parts of the world,” Steinmeier said.

Together with universities and the German Academic Exchange Service (DAAD), Germany’s Foreign Office has been preparing the foundation of the institute – subsidized with a yearly sum of 400,000 euros ($424,900) from German tax credits – since 2014.

The institute is expected to start work this summer, with the aim to advise on policy and conduct research on peace and conflict.

“Reconciliation in Germany is our guide to peace in Colombia. With the contribution of this country, our experience will be an example for other conflicts,” he said.

Steinmeier also met on Friday with his Colombian counterpart, María Angela Holguin, who thanked Germany for its help in reconciling with the rebels.

“There is still a great challenge ahead,” Holguin admitted after Steinmeier praised the deal as a “signal of hope for the whole world.”

The peace deal, struck between the Colombian government and the FARC rebels in November, centers around some 5,700 members of the Revolutionary Armed Forces of Colombia (FARC) giving up armed struggle and transforming into a legal political party. It also addresses transitional justice issues, amnesty, drug trafficking, and rural development.

Proof in the process

As part of his visit, Steinmeier also travelled to a FARC demobilization zone, south of the capital in Mesetas. Some 650 to 700 former rebels are expected to descend on the camp in coming weeks.

So far, only three representatives have turned up and no weapons have been handed in. A 44-year-old FARC leader, who called himself “Kunta Kinte” was confident that the peace process would be successful.

The German foreign minister said it was “amazing and surprising” to see government forces and former FARC fighters cooperating so well under one roof.

“Here is where the peace treaty will prove itself,” he added.

The nearly 50-year conflict between FARC and the Colombian government has claimed more than 260,000 lives and displaced several million people.

Despite the deal being signed, and demobilization about to begin, implementation of the accord is likely to encounter many hurdles in the coming months. Concerns have been raised that some guerrillas may join criminal drug gangs or the smaller left-wing National Liberation Army (ELN) during the reintegration process.

A recent increase in attacks on pro-peace and rural activists has also added to worries that right-wing paramilitary groups and landowners may act as spoilers.

Steinmeier’s visit on Friday came as representatives of the Colombian government and the ELN met in Ecuador to set a concrete date to begin public, formal peace negotiations.

Talks had been scheduled to start Thursday, but according to the ELN, they were delayed for “logistical” reasons.