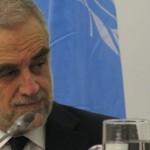 A possible amnesty for FARC guerrillas would violate Colombia’s commitments to international law, said a former chief prosecutor of the International Criminal Court (ICC) in Bogota on Wednesday.

The International Criminal Court (ICC) is a top-level international court based out of The Hague in Belgium, which deals with the prosecution of genocide, war crimes, and crimes against humanity.

“The agreements that were possible with the M-19 (guerrillas demobilized in 1991) and offered to the FARC in Caguan (failed attempt at peace between 1998 and 2002) are not legally possible today,” he said, “the model has changed.”

The ICC was born in 2002 via the Rome Statute. Colombia ratified the treaty just two days before the start of the presidency of Alvarro Uribe. Due to the terms of the ratification, the court can only investigate and prosecute crimes committed after 2002 in the case of genocide and after 2009 for crimes against humanity.

This is not the first time that Colombia has been warned about its commitments to the ICC.

As recently as August this year, the current chief prosecutor, Fatou Bensouda, called for the FARC to be held to account for crimes against humanity.

She made the comments after Colombia’s chief prosecutor Eduardo Montealegre stated demobilized FARC guerrillas may be able to evade prison under a post conflict transitional justice system, even if they are convicted of crimes against humanity.

“I believe that it is possible…the sentence can be provisionally suspended if this corresponds to the needs of overcoming the conflict,” said Montealegre.

But after meeting Bensouda in New York City in September, President Santos confirmed that the two were on the same page and that that he looks forward to working with Bensouda for peace.

“She showed a strong willingness to support our peace negotiations with the FARC,” he said.