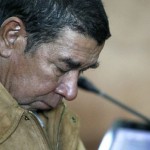 A former commander of the now-defunct AUC on Monday asked forgiveness to the families of victims he admitted to have tortured and killed while he was with the paramilitary group.

Ramon Isaza, alias “El Viejo,” testified before a Bogota human rights court about crimes he committed during his time as the commander of the AUC’s Middle Magdalena bloc.

El Viejo admitted that he had tortured and assassinated several people and hurled their bodies into rivers.

Victims groups had asked El Viejo for his motivation for his cruelty, but the presiding judge urged the victims groups to uncover more paramilitaries involved to prosecute.

“I am asking for clarity on who else collaborated with these deaths,” the judge reportedly said.

The additional crimes that are building up against ex-paramilitaries such as Isaza include forced prostitution, sexual slavery, terrorism, kidnapping, torture, drug trafficking, and false investiture.

After this round of testimonies conclude, all of the information will be handed over to the prosecutor general of Colombia, who will review the charges, the admissions of guilt, and the attention paid to victims to ultimately determine if they qualify for the Justice and Peace law, according to newspaper El Espectador.

Colombia’s Justice and Peace Law was enacted in 2005 to legally sustain a demobilization treaty between right-wing paramilitary group AUC and the government of former President Alvaro Uribe.  In exchange for cooperating with authorities and demobilizing, the AUC received a pledge that no-one who came in as a result of the law would receive more than eight years in prison.