One of Colombia's most controversial political leaders faces charges of fraud and bribery. Alvaro Uribe also stands accused of being a founding member of a paramilitary group and could face up to eight years in prison.

(QCOLOMBIA) Colombia’s highest court last week ordered that former President Alvaro Uribe be placed under house arrest while it advances a witness tampering probe against him. In a statement, magistrates said they found “possible risks” of obstruction of justice. 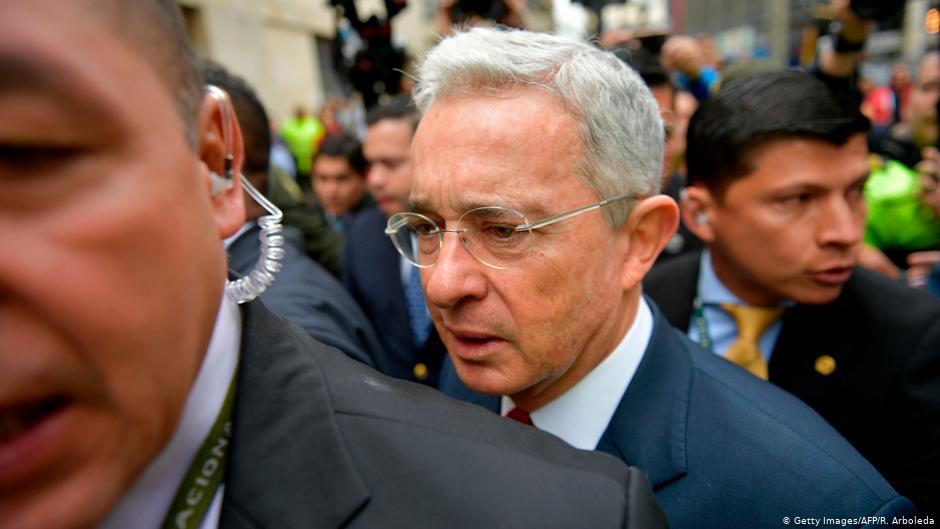 “He will fulfill his detention from his residence,” said court chamber President Hector Javier Alarcon, who is handling the case. “From there he can continue his defense with all the guarantees of due process of law.”

The 68-year-old must now wait to be called for a trial before the Supreme Court, the body that judges lawmakers.

Investigators will continue probing accusations Uribe had a role in bribing potential witnesses against him. The move courted support from rights groups.

“The court is showing that everyone -—even the most powerful — is equal before the law,” said Jose Miguel Vivanco, the America’s director of Human Rights Watch.

“It hurts, as a Colombian, that many who have wounded the country with barbarities defend themselves in freedom,” Duque said, adding: “And that an exemplary public servant who has held the highest position of the state cannot.” Uribe was also a political mentor to Duque.

Uribe has not yet been charged and denies the accusations.

“This causes me profound sadness, for my wife, for my family…and for Colombians who still believe I’ve done something good for the homeland,” the ex-president said on Twitter

The 68-year-old faces bribery and procedural fraud charges and could serve up to eight years in prison if convicted.

Accusations of ties to paramilitary group

The latest investigation into Uribe stems from accusations made by Senator Ivan Cepeda, who alleges that the former president was a founding member of a paramilitary group during the nation’s decades-long civil conflict involving leftist guerillas, right-wing bands and government forces. Hundreds of thousands were killed, displaced or went missing during the conflict.

Uribe accused Cepeda of slander, but the high court dismissed the case, instead opening up the probe into allegations of bribing witnesses who could testify against him.

In October 2019, Uribe was questioned by judges, the first time an ex-president had appeared before the Supreme Court.

A conservative who served as president from 2002 to 2010, Uribe remains one of Colombia’s most popular politicians and enjoys strong support due to his hardline stance in handling leftist guerrillas, especially the Revolutionary Armed Forces of Colombia (FARC).

His successor, Juan Manuel Santos (2010-2018), reached a peace deal with the FARC in 2016, a move that both Uribe and Duque have criticized.

While supporters credit Uribe for weakening FARC and other rebels, others point out that some of the country’s worst human rights abuses took place during his presidency.

The probe has divided citizens in the South American country, triggering protests both in favor and against Uribe prior the coronavirus pandemic.