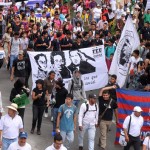 Fresh protests involving over 1,000 farmers began in Bogota Tuesday, amid calls from a farm leader for the Colombian government to honor commitments made to farmers before the 2014 election cycle gets underway.

“Today, the country people are mobilizing in Bogota to pressure the government and we urgently call for sanity and democracy in Colombia. Today, we see hope with this Colombian government but the situation is very serious,” said Luz Dary Hernandez, spokesperson for the Small and Medium Farmers Association of Boyaca and Agricultural Comprehensive Coordination Bureau for Boyaca.

“If negotiations fail, we must return to mobilize with roadblocks. That is not what we want. It would be a distressing consequence but if we don’t get an answer, that’s what we will have to resort to,” she said.

Hernandez was alluding to the widespread strikes agricultural strikes that began on August 19 this year, when highways and towns were blockaded across the country.  The strikes would eventually draw tens of thousands of protesters, five farmers were killed in clashes with riot police and 485 people reportedly were injured.

Not living up to expectations

The original strikes came to an end when the administration of President Juan Manuel Santos and representatives from Colombia’s agricultural organizations came together to hammer out 12 points.

The farmers and the government have now had many rounds of negotiations, with the final deadline for delivering on those promises slated for December 12, Hernandez said.

Farm leader Cesar Pachon in October told media that the government had failed to meet any of the farmers’ demands that led to the talks: improve farmers’ access to credit, lower prices of supplies, and limit food imports.  He said, the only progress the government has made was a purchase of potatoes.

Farmers: We don’t know who we will be negotiating with

With Colombian Presidential and Congressional elections due in 2014, Hernandez said it was critical to get the issues of the farmers addressed before more strikes become necessary.

“The situation is very serious. Now that the President has announced his candidacy for re-election [in 2014], we might not even get Santos as a negotiator and if he is delegating the talks to his ministers, who might also be changing, we don’t know what will happen to the negotiations.”

“That’s why we need to return to the table now,” she said.

Since September, President Santos and his administration maintain that they are working to fulfill the commitments already made.

MORE: Farmers have ‘no reason’ to talk of new strikes: Santos