FARC to negotiate for legalization of drugs in peace talks: Commander 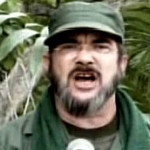 The FARC plans to promote a discussion over the legalization of illicit drugs in ongoing peace talks with the Colombian government, according to the rebel group’s leader.

Timochenko claimed that the majority of drug-related violence in Colombia could be eliminated if the government focused on regulating substance use rather than combatting narcotics production and distribution, mentioning positions outlined by figures such as Nobel Laureate Milton Friedman.

The rebel commander explained that the FARC have supported a shift in drug policy for some time, citing a 1993 proposal released by the group in particular.

“A solution to the production, commercialization, and consumption of narcotics and hallucinogens, which we realize has been filled with serious social problems, cannot be dealt with by the military…it requires agreements and compromises between the national and international communities acknowledging the global demand for narcotics,” stated the plan.

Timochenko assured his readers that when discussing illicit drugs –the fourth out of six agenda items in ongoing peace talks in Havana, Cuba– both the rebels and the government will be sure to take into account the culture of illicit drugs, plans for development, and the execution and evaluation with community participation.

In addition, the delegations plan to examine highly affected areas of the drug trade such as prevention programs and general public health.

Timochenko’s most important priority is to decide the “best way to put an end to the never-ending injustice suffered by the farming communities of the country, one of the historical reasons why our fifty-year fight continues.”

Interestingly enough, President Juan Manuel Santos is in agreement with Timochenko.  Santos has spoken out in favor of legalizing much of the drug trade for years now, and notably supported Mexico’s president’s similar belief.

There has been much debate over the extent of the FARC’s involvement in drug trafficking in Colombia. Narcotics organizations such as Pablo Escobar’s infamous Medellin Cartel historically disliked the FARC because the rebel group would extort and impose taxes on coca farms and cocaine laboratories for revenue, hindering the cartels’ production. Also, the FARC’s core communist ideologies were not in alignment with those of the property-driven narco-traffickers.

During the last 20 years of the 20th century, however, the FARC and other rebel groups increasingly turned to narcotics as a way of financing their military operations. Presidential hopeful Oscar Ivan Zuluaga is among those who believe that the FARC, to this day, is the largest drug trafficking organization in the world, despite evidence that other groups have surpassed them.

Ongoing peace talks between Colombia’s government and the FARC reach their one year anniversary on November 19.  Thus far, two of the six agenda items have been agreed upon: agrarian reform and political participation.

The post FARC to negotiate for legalization of drugs in peace talks: Commander appeared first on Colombia News | Colombia Reports.