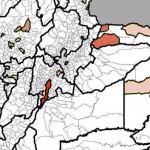 An NGO dedicated to monitoring kidnapping in Colombia announced on Monday that rebel group FARC has kidnapped 23 people since peace talks with the government began a year ago.

The Pais Libre Foundation said that the guerrillas were particularly active in kidnapping in the first quarter of the year when 11 people were kidnapped by alleged rebels.

Four people were allegedly kidnapped by the FARC in the quarter before that, while another eight were kidnapped between April and September this year.

The NGO made no distinction between kidnapping of civilians and the capture of security forces in combat situations.

The FARC banned kidnapping for economic or political purposes in the beginning of 2012, half a year before negotiations with the government began.

In the course of the year, a total of 228 people were kidnapped in Colombia, 8% of them allegedly by the FARC. Before the guerrillas banned kidnapping, they were held responsible for a quarter of kidnapping taking place in the country.

The vast majority of kidnapping is carried out by common criminals, said Pais Libre.