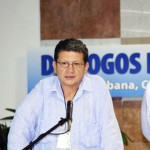 Colombia’s largest rebel group, the FARC, on Monday proposed to decriminalize the cultivation of illicit crops and approach illicit drug use as a public health rather than a public security issue.

The ten-point proposal is the FARC’s contribution to ongoing peace talks with the government.

In the proposal for a “Anti-Drug Policy for the Sovereignty and Good Living Conditions for the Rural Poor” the guerrillas expressed their wishes to create “structural conditions” allowing coca farmers to turn to alternative crops.

Meanwhile, the guerrillas asked for a permanent end to controversial aerial fumigation, which allegedly is causing health issues with people in areas where these operations are taking place.

Moreover, the FARC wants a “demilitarization” of Colombia’s counter-narcotics policy, resist “imperialist” intervention and prevent the criminalization of poor farmers in the countryside who feel forced to grow coca in order to be able to provide for their families.

In a previously released proposal from 1999, the guerrillas proposed to take up an active role in the substitution of illicit crops.

Additionally, the guerrillas want the anti-drug policy to focus on “the dismantling of the narco-paramilitary, criminal and mafia-like structures enthroned in the State” and the prosecution of those making money of drug trafficking indirectly, for example through money laundering.

When it comes to drug use and abuse, the FARC wants Colombia to treat drug consumption as a public health issue rather than a public security issue.

The administration of President Juan Manuel Santos last year ratified a bill that did exactly that.

As part of the peace talks that seek the end of almost 50 years of conflict between the state and the FARC, the negotiators are debating the rebels’ involvement in drug trafficking which has been of large financial support for the FARC since the 1980s.

The issue is the third point on the six-point agenda that seeks to be finalized by a peace deal, the disarmament of the FARC and the reintegration into society of its members.