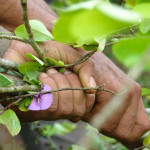 Rebel group FARC, currently negotiating an end to Colombia’s armed conflict with the government, want to take up an active role in a proposed pilot project that seeks to help coca farmers grow alternative crops.

In a statement published on the guerrillas’ website on Sunday, the FARC suggests to revive a proposal that first came on the table during the failed 1999-2002 peace talks with former President Andres Pastrana.

The group is currently engaged in talks about what to do with the FARC’s involvement in drug trafficking after a peace agreement is reached and the rebels are reintegrated into society.

According to the FARC proposal, a pilot program would be kicked off in a municipality in the southern Colombian state of Caqueta, a rebel stronghold.

The rebels stress the importance for a long-term policy in the village of Cartagena de Chaira to make sure local coca farmers are not left without source of income and receive the opportunity and necessary aid to develop alternative revenue.

The FARC wants its locally operating military unit, the 14th front, to team up with the municipal government to oversee a five-year project that includes a soil study, the consecutive planting of alternative crops, an increase in cattle and the eradication of coca.

As a first step, the guerrillas want the government to begin with the appointment of agronomists, sociologists, economists and anthropologists to study the local soil and economic potential.

Colombian and foreign investors will then be invited to invest in a local fund that seeks the purchase of crops, cattle and material necessary to start up a local economy that is not based on coca cultivation while the national government invests in the development of infrastructure that allows the farmers to sell their products.

Additionally, the guerrillas want consumer countries like the US to financially support the efforts to switch crop.

“The experiment seeks to demonstrate that illicit crops are not difficult to eradicate, if you take into account that when the will and desire to fight this global phenomenon exist, it must be done with large investments, aimed at solving the social problems that have arisen and not devoting large sums of money to repressive plans against the population. As a problem of all mankind, it is everybody’s duty, and even more of the consumer countries like the United States, parts of Europe, Asia and those that produce fertilizers and chemical precursors, who are the ones who really benefit from the sale of these products that serve to process the coca leaf. Those countries should bring in enough money to make the experiment of Cartagena del Chaira successful,” the FARC said in its proposal.

Once this is underway, the FARC promises to actively employ its local members to help the farmers remove their old and plant their new crops.

Foreign emissaries from the United States, France, Spain, Great Britain and the United Nations will regularly be briefed by the local FARC commander about progress, according to the guerrilla proposal

Additionally, the guerrillas want more of an emphasis on tourism, which has long been impossible because of the violence between army and guerrillas going on in the area.

“In order to develop the economy of ecotourism as a sustainable and viable project in the region, it is necessary to establish strategic alliances with foreign and domestic companies to invest and guarantee the exploitation of tourist infrastructure in the area. To change Cartagena del Chairá into a center of tourism, natural resources should be conserved. Its lagoons, its jungle with its wealth of native wildlife, islands and beaches along the banks of the 280 kilometers long Caguan River and others in the river Suncillas should be used for this purpose,” the guerrilla organization wrote.

Finally, the state should increase its presence in the area to make public services more widely available for a the local population, said the FARC, who claim that coca cultivation in the area has been fueled by an abandonment of the state.