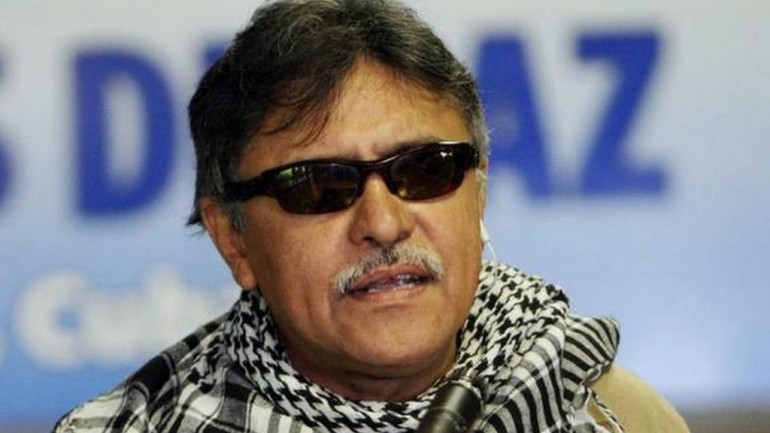 Colombia’s largest rebel group, the FARC, on Thursday pressured the government delegation taking part in peace talks to agree to a partial agreement on victims “now.”

At the FARC’s daily press conference in Havana, Cuba, guerrilla commander and negotiator “Jesus Santrich” urged the government to agree to a pact on victim recognition and reparation before the end of the ongoing 38th round of talks that began Wednesday and are set to end within two weeks.

According to Santrich, the FARC “want to close a pact regarding victims now and not go around the world spreading misrepresentations,” referring to President Juan Manuel Santos who last week called on the FARC to accelerate the talks while doing a European tour seeking international support for a possible post-conflict situation in the country.

The FARC’s 10 proposals on victim reparation

The FARC’s latest proposal consists of the following:

The FARC wants to amplify the 2011 Victims Law that regulates victim reparation and the restitution of lands. The guerrillas also seek a Pluralist and Unified Victim’s Registry which would hold victims of both the FARC, the state, and state-aligned paramilitary groups

The FARC called for a “collective act of political repentance” in which both parties openly admit to their crimes “as an expression of willingness to contribute to a Never Again.”

Satisfaction of the rights of victims

In order to repair victims, the FARC urged the government to agree to its earlier proposal to create a “Special Fund for Integrated Reparation” consisting of 3% of Colombia’s GDP for a period of ten years. This fund would finance a “National Plan for the Integrated Reparation of Conflict Victims.”

Individual victims and victims rights organizations should be directly involved in the formulation of policies that would contribute to the granting of victims’ rights, the FARC said.

As already announced by the government and the rebels, the FARC call for a Truth Commission and urge the government to agree to an “integrated system of truth, justice, repeat and no repetition.”

With the demobilization of its own military apparatus, the FARC also called on the government for a radical reform of the armed forces who, like the FARC, are accused of thousands of human rights violations. The guerrillas also want the government to turn back any agreement with other countries in regards to military cooperation “that imply harm to national sovereignty,” an implicit urging to end military cooperation with the United States, which has helped the Colombian government fight the guerrillas.

The FARC, whose leaders so far have refused to accept prison sentences for crimes committed under their command, also proposed sanctions for individuals and corporations that have committed crimes within the context of the conflict.