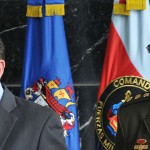 Defense Minister Juan Carlos Pinzon told press that he had met with Uribe to inform him of the nearly 50-year-old rebel group’s alleged intention to kill the former head of state, who has been one of Colombia’s most vocal opponents of ongoing peace talks with the guerrillas.

“As instructed by President Juan Manuel Santos, I, together with Police director General Rodolfo Palomino, met with former president Alvaro Uribe to inform him of a detected plan to make an attempt on his life,” said Pinzon.

Consequently, Santos ordered the formation of a 300-men unit in charge of protecting the former president and his immediate family, said Pinzon.

The revelation of the plot followed the arrest and release of a guerrilla dubbed “Caremango” (Mango face) who according to newspaper El Espectador is now accused of being behind the alleged assassination plans.

The FARC — to the disapproval of Uribe — has been involved in peace talks with the Santos administration since November last year. Both the rebels and the military continue to carry out military operations as the parties could not agree on a ceasefire for the duration of the negotiations.

Uribe did not make a public statement regarding the alleged assassination plan.