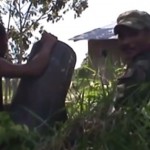 A mortar attack allegedly launched by Colombia’s largest armed guerrilla group FARC resulted in no injuries and no damage to a naval base in the southwest of the country, the Navy said Tuesday.

The base protects oil handling facilities at the port of Tumaco, a town less than 30 miles from the border with Ecuador.

On Tuesday, the navy continued to scour the Tumaco nieghbourhood of Nuevo Milenio, where attack was allegedly launched from.

This is the second mortar attack in as many weeks in the border region with Ecuador, after an alleged FARC attack left 20 homes destroyed.

The attack also comes only a week after the aniversary of the Havana peace talks between Colombia’s government and the rebel group.

The parties have not agreed upon a ceasefire during the negotiations — meaning that both continue to carry out military operations and attacks. Nevertheless, according to statistics provided by Colombia’s Ministry of Defense, the number of attacks on security forces and civilian targets dropped 46% over the past year.