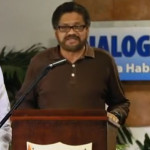 Colombia’s oldest rebel group FARC presented 12 minimum proposals for the formation of a constituent assembly, as ongoing negotiations with the government in Havana, Cuba, will be suspended over Christmas until January 13.

As the rebel group mentioned in their press release, as they “do not want only cosmetic changes, but structural changes,” this would call for a “National Constituent Assembly for peace, real democracy and national reconciliation” that Colombia’s people “must endorse” as part of the popular referendum which is to seal an eventual peace deal between the two parties.

Regarding this constituent assembly, the organization presented 12 minimum proposals:

Peace talks now ended their 18th round discussing the FARC’s involvement in drug trafficking while compensation for the human rights victims of the conflict is the next point on the agenda, before a final sixth agreement ratifies the entire process between the two parties.