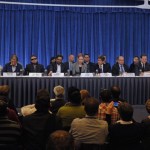 Negotiators of the Colombian government and rebel group FARC on Wednesday will hold a press conference during which the announcement of a deal on the political participation the group is expected.

Sources close to the talks confirmed to Colombia Reports that a press conference will be held between 11AM and 11:30AM Wednesday morning.

The political participation of the rebels is the second of a six-point peace agenda that has been negotiated since talks began in November last year.

In the agenda, the warring parties already agreed to come to an agreement on the rebels’ participation in politics.

In the preliminary accord the government and FARC agreed to tackle the following points:

MORE: Text of deal between Colombia’s government and FARC to end armed conflict

The agreement on political participation follows weeks of increased criticism on the speed of the talks, which President Juan Manuel Santos admitted went slower than anticipated ahead of the negotiations.

The two parties have now found consensus on the two most important and thorny points on the agenda; in May the negotiators announced a deal on agrarian reform, which was widely seen as the most difficult.

Following the political participation pact — which will not be signed until all points of the agenda are agreed upon — the negotiators will focus on the end of the armed conflict through a bilateral ceasefire, the laying down of weapons by the guerrillas, the rebels’ involvement in drug trafficking and victim compensation.

The FARC, formed by farmers in the south of the country in 1964, have been fighting the Colombian state in the longest ongoing guerrilla war in Latin America.