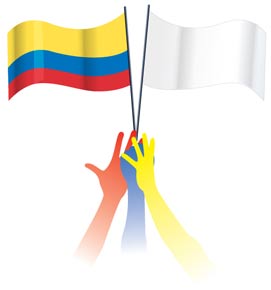 The Colombian peace negotiations between the Colombia Revolutionary Armed Forces of Colombia-People”s Army (FARC-EP) and the government will resume on November 28, the parties said in a communique.

After the closing of the latest round of talks, the delegations stated that they would resume activities today, however, they postponed the resumption “with the purpose of refining visions, exchanging documents, and analyzing the different proposals received from different sectors of the society.”

The joint statement said the solution to the problem of illegal drugs will begin to be analyzed as of this cycle.

This third item includes listening to experts and receiving the conclusions of the forum organized by the UN Office in Colombia and the National University’s Thought Center for Peace.

Tomorrow marks one year since the establishment of the negotiation table in Havana. At this time, those negotiations achieved consensus on the issue of agricultural development and the future political participation of the armed group and other organizations in the civil life of the nation.