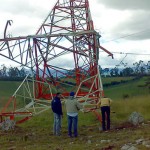 An attack on an electricity tower allegedly carried out by a local FARC unit in the southwest of Colombia left the 300,000 inhabitants of Buenaventura, Colombia’s main port city on the Pacific, without electricity.

Alleged members of the FARC’s 30th Front, active in the jungle region around the port city, blew up an electricity tower just outside Buenaventura. The tower reportedly provided the entire city of its electricity.

Buenaventura Government Secretary Ledis Torres, responsible for public security in the municipality, told US news agency The Associated Press that reparations to the tower and Buenaventura’s power supply were already being repaired.

According to local energy company EPSA, it is “working in coordination with the authorities to begin the technical operations, trying to reestablish the service once the area is secured.”

EPSA said in a press release that the tower’s remote location in a jungle region makes a repair operation more difficult; Five repairmen were killed and another six injured in the southwest corner of Colombia after detonating landmines the guerrillas had planted around a destroyed tower.

Authorities have said that the FARC has attacked more than a dozen electricity towers in the region over the past weeks.

According to Colombia’s defense ministry, the number of attacks on public property dropped in 2013 compared to the year before.

The FARC is currently engaged in peace talks with the government, possibly ending a conflict that has been ongoing since 1964. In spite these negotiations, both parties continue to carry out military offensives as no agreement was reached on a bilateral ceasefire for the duration of the talks.