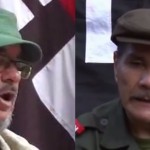 The two leaders of the rebel groups sent out an end-of-year greetings to all members of the organizations mentioning the shared political goals that they have been trying to complete in the last fifty years of armed struggle against Colombia’s state.

“We were born of the same seed, rebellion and heroic resistance of our people, and we have grown into a giant tree with two trunks which has remained faithful to the interests of the marginalized people, facing the hostile economic policies and repression of the oligarchy dominating our country,” “Timochenko” of the FARC and “Gabino” of the ELN said in the statement.

The rebel leaders went on about their organizations’ shared political goals that would require a joint strategic orientation, calling it “not only a strategic need but also a moral obligation.”

The statement comes after a reported agreement of the two rebel groups which came to exist after a meeting of their leaders about seven weeks ago near the border of Venezuela, where they decided to join forces in order to carry out attacks against the oil and energy infrastructure of Colombia.

While expressing skepticism about the Colombian government’s intentions for holding peace talks, the two commanders stressed the opportunity that the talks would allow members of the rebel groups to be integrated into Colombia’s political system and society.

“The peace talks offer a big opportunity for the guerrilla: opening up spaces to engage in politics, to approach the population and to continue conquering the hearts of Colombia’s people, so that we can become the most powerful factor of popular agitation and organization.”

Peace talks with the FARC are currently about the rebels’ involvement in drug trafficking while compensation for the human rights victims of the conflict is the next point on the agenda before a final sixth agreement ratifies the entire process between the government and the country’s oldest rebel group. Formal peace talks with the ELN are expected to be announced in the near future.