Family of 4 found dead in Bogota 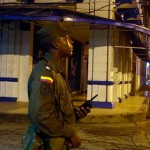 A family of four has been found dead in a house in south Bogota by Metropolitan Police, local media reported Monday.

The family, including two girls of the age of 5 and 7 years-old, were found in their house in the neighborhood Bridges, located in the south of San Cristobal.

A relative called authorities after having unsuccessfully tried to reach the family for several days.

Early examination show no signs of violence and indicates it may be suicide, reported El Espectador.

Forensic authorities will determine time and cause of death at a later time.