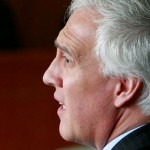 The “Contracting Merry Go Round,” as local media has labeled the trial of a corruption scandal that has engulfed ex-Mayor Moreno since 2011, has revealed that the politician pocketed $15,650,000 dollars for giving Bogota public work contracts to the Nule Construction Company over other contractors.

Samuel Moreno became mayor of Bogota in 2008, but was forced to step down in May of 2011 due to the inspector general’s accusations of irregularities concerning public work contracts.  After four months of suspension and investigation, Moreno was arrested and put in jail to await trial.

Moreno stayed in jail for two years before he was granted trial, during which he was denied bail four times as he was deemed a “danger to society” according to the presiding judge.

The laundry list of charges facing the ex-mayor includes conspiracy to commit a crime, corruption, bribery, embezzlement by appropriation, extortion, and undue interest in the conclusion of contracts.

Nule’s testimony was a big blow to not only the already diminished credibility of the politician in question, but also to Moreno’s brother and ex-senator, Ivan Moreno Rojas, who Nule implicated as well.

If found guilty, ex-Mayor Moreno could face up to 21 years in prison.