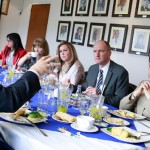 The European Union will be providing financial support to Colombia’s National Institute of Forensic Medicine (INMF) as part of an international cooperation project, reported the Colombian Prosecutor General’s Office on Tuesday.

The announcement came after the European Union’s Ambassador to Colombia was given an official tour of the main INMF facilities by the center’s director and other high-level Colombian officials.

Specifically, the European Union will be assisting in the creation of a mobile unit division, in the interest of expanding forensic services into areas of the country still underserved.

Six mobile units will come directly from the European Union itself, three for the National Institute of Forensic Medicine and the other three for the Technical Department for Investigation (CTI).