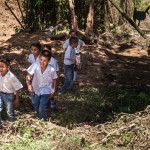 The European Union (EU) increased its financial support of education in Colombia Wednesday through its Nobel Peace Prize-winning “EU Children of Peace” initiative.
“In the case of Colombia, we put the emphasis on all of the children that can have an education and potentially go to university and study,” said EU Commissioner of Humanitarian Aid Kristalina Georgieva to news outlet EFE.

Georgieva announced that the EU will increase spending in Colombia by $4 million Euros in 2014, doubling current levels.
The Children of Peace program, which recently celebrated the one-year anniversary of its 2012 Nobel Prize, aims to assist more than 80,000 children affected by different types of conflict around the world, and has already provided direct educational support to an estimated 1,550 children in Colombia.

“There are conflicts that we see and those that we don’t see and forget they even exist. The latter is Colombia’s category,” said Gorgieva, who also expressed that children surrounded by armed conflicts like the one that has gripped Colombia for more than 50 years “are losing their opportunity to learn.”

In Colombia, the program has sought to create “protected spaces” where children can feel safe and participate in various educational, cultural, and recreational activities. “EU Children of Peace [looks to] provide a secure space where the memories of war can be laid to rest…[so that the children] can return to their houses to reconstruct their country,” said Gorgieva.

Marta Juarez, the Director of the Americas Office of the EU’s High Commission of the National Unit for Refugees (ACNUR), said that the prize-winning initiative has helped with her office’s efforts targeting Colombia, noting that the timing of the new investment is ideal, as the Colombian government and the FARC rebel group recently completed the first year of a negotiation process aiming to bring a substantive peace deal to the war-torn nation.

“We have to prepare the new generation to see that there is something more out there than just conflict…That there is hope, and that each one of them has the responsibility to bring peace to Colombia,” said Juarez.