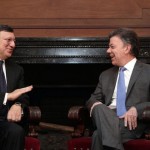 Referring to the ongoing peace process between Colombia’s government and the country’s oldest rebel group FARC in Havana, Cuba, Barroso ensured that the EU would “stand beside Colombia” and will reward the country’s peace efforts with its solidarity.

“Europe’s experience shows that peace is worth it and that concessions are worth it to reach peace, even though they might be appear costly,” the EU president was quoted saying in a notification by the office of Colombian leader Juan Manuel Santos.

Barroso addressed the rebel group FARC directly, calling on them to recognize their responsibility in coming to the successful completion of the peace process.

“The FARC has a great responsibility to reach peace and I would like to call on their leaders act according to this historic moment that Colombia is experiencing right now,” Barroso said in the press release.

Furthermore, the European official offered financial aid to support the implementation in the event of a peace agreement.

If successful, the peace talks will put an end to nearly 50 years of conflict between rebels and state during which more than 220,000 Colombians were killed and more than 4 million persons were displaced from their homes.

Santos welcomed this support, stressing that “it would legitimize the peace process and help it stay on the right track.”

During the afternoon, Barroso reportedly presented Colombia with $680,000 in financial aid for an international development project aimed at improving access to education in the country and protecting children affected by armed conflict.

The EU dignitary will end his official visit with a speech at Bogota’s Chamber of Commerce, discussing relations between Europe and Colombia as they pertain to the acting free trade agreement that took effect earlier this year.