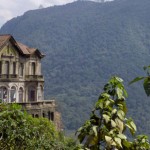 An historic Colombian hotel in the countryside outside of Bogota recently reopened its doors as an ecological museum and has now received $410,000 from the Europen Union to further develop biodiversity programs.

The surrounding area had long since been known for its natural beauty and the large waterfall that gave the museum its name. Now that the waterfall has run dry, the museum hopes to promote the local biodiversity by putting together expositions focusing on subterranean ecosystems.

“LAIF wanted to support not only the house but also Tequedama Museum and support the Ministry of Environment in projects of strategic management macrocuencas Pacific, Orinoco and the Amazon,” said the EU ambassador in Colombia, Maria Antonia van Gool.

Constructed in 1923 by architect Carlos Arturo Tapias, the mansion was once a symbol of the 1920s Bogota elite. But it was abandoned roughly 20 years ago and left to fall into disrepair as the nearby river became increasingly contaminated.

MORE: Historic Colombian hotel to be converted into museum

In 2010, the iconic Tequendama Falls, a popular Colombian tourist destination located some 15 minutes west of Bogota, ran dry and the remaining water filled with polluting waste.

Since the Bogota River began being diverted away from the waterfalls in the 1930s in order to supply the manmade Muna lagoon, the waterfalls have been plagued by problems of pollution and water flow.