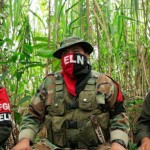 The ELN, which is believed to have 1,500 armed combatants in its ranks, said that there were a sufficient number of “gifts” agreed upon in last week’s mostly undisclosed agreement between the FARC and the government.

This deal would be enough to “remedy a good part of the prevailing anti-democracy in Colombia,” according to the guerrillas.

The subject of political participation has long been one of the biggest ideological battles for guerrilla groups, most of which initially formed as a response to intense political persecution.

“The shower of  gifts announced for the purpose of having democracy exist, means that the agreement is finally going to have statutes for the opposition, democratic participation of citizens, guarantees for protests and demonstrations, mediums of communication, councils for…cohabitation, transparency, citizen participation in development plans, [means of making] new political parties…revision of the electoral system, “special peace districts,” protection for political leaders and women participation [in government],” professed the ELN.

The guerrillas did note however that the “gifts” are still at this point only “virtual” and that it will require a “touch of magic” to make these deals become realities.

“The magician…is the guerrilla group that makes achievements for change with good behavior,” said the article.

Talks of peace talks with the ELN have been floating around for over a year since those with the FARC began.  While the second largest guerrilla group has expressed desire and preparedness to enter peace talks, the government seems to be waiting to see the result of ongoing dialogues with the FARC occurring in Havana, Cuba, before committing to sitting down to the table.

The ELN has said however that their peace team is “formed and ready” to begin talks with the government.

The ELN is also suspected of putting pressure on the government through a string of infrastructural attacks including allegedly causing serious damage to various northeastern Colombian oil pipelines.

“Can you fulfill your promises for democracy without signing peace agreements with the guerrillas?”

The fourth attempt at peace talks with the FARC will reach its one year anniversary on November 19.