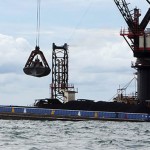 US coal giant Drummond is under fire once again from the Colombian state, though this time the accusations have nothing to do with illegal coal dumping, but rather with issues concerning unpaid taxes.

“One of the inquiries began last year because of the extension of their beachfront concession, and it amounts to US$58 million,” the Comptroller General stated at a press conference.

The second charge against Drummond by the Comptroller General’ Office is for exceeding the limitations of its ship capacity.

These recently announced transgressions by the US-owned mining company – who contributes to a third of Colombia’s coal exports – joined an additional case which had been underway for around four months for US$25.5 million worth of unpaid royalties to the Colombian state. This figure will have increased since it was updated in December 2012.

The list of unpaid bills is running rather long for the US coal giant, which was fined US$800,000 earlier this week for not using direct coal loading techniques and therefore breaking environmental laws that were set in place on January 1 of this year.

This comes not long after being penalized for US$3.5 million in December of 2013 for dumping nearly 2,000 tons of coal in the Caribbean Sea.

The most recently announced charges are in reference to the illegal expansion of Drummond’s barge loading bay from 492 feet to 1,932 feet, and from 104 feet to 164 for minor embarkations.

They have been brought against the company and four employees who were responsible for supervising the fulfillment of the contract.