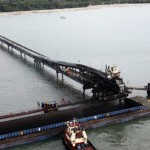 The U.S.-based Drummond Company is claiming that the recent suspension of its shipping licence by the Colombian government is a violation of its legal rights. In an open letter released Monday, the multinational coal mining firm claims that the temporary shutdown of its Colombia-based shipping operation contradicts previous agreements it had signed with the Colombian government.

The Alabama-based company was forced to close its private Caribbean port two weeks ago when it failed to meet the January 1st deadline for the implementation of a direct-loading conveyer belt system. The deadline was set by the Colombian Environmental Ministry after a company barge dumped almost 2,000 tons of coal into the Bay of Santa Marta last year. The regulation outlawing crane-and-barge coal loading had been in place for six years prior to the incident.

The company, however, is now arguing that the suspension of its shipping license is prevented by the 30-year concession title granted to it by the Colombian government — which does not expire in 2023 — as well as the $360 million it has already invested in updating its loading system, which “demonstrates [its] good faith commitment to the dictates of government.”

Despite the company’s claims that it has been “falsely portrayed as a defiant company and demeaned in the press and by others,” Drummond’s history in Colombia has been at the very least controversial.

In the past two months alone, the company has been fined $100 million for tax irregularities and $3.5 million for attempting to coverup last January’s Caribbean coal spill.

A UN report last week discussed the role Drummond and other coal industry leaders have played in fueling widespread poverty in the communities where they operate. For years, the company has been accused of unfair labor practices, potentially deadly pollution, and creating systems of economic dependence.

The most damning stains on Drummond’s record, however, pertain to its use of illegal paramilitary forces to further its interests in the region.

Following the 2006 disarmament of the AUC paramilitary block, a number of ex-paramilitary leaders claimed to have received direct payments from the company and instructions to intimidate unions and local communities in the state of Cesar, confirming the unions’ accusations against the company.

Drummond contractors were ultimately convicted in Colombian court of ordering the murder of several prominent figures in the company’s primary union, and a number of lawsuits alleging collusion with a labeled “terrorist” organization have been brought to U.S. court since 2007.

Regardless of the company’s troubled past, this most recent suspension, expected to last until March, may have significant economic consequences for the country as a whole. Colombia is the world’s fourth-largest exporter of coal, with Drummond thought to export some 80,000 tons of coal per day. The multinational argues that the ban could mean a loss of work for Colombian employees and cause Colombia to miss out on royalties, as foreign companies look to fill the supply gap.

The government’s stance, at this stage, appears to place priority on the environmental factors of this issue rather than the economic ones. Environment Minister Luz Sarmiento has been quoted as saying ,”We know this is a very costly decision from a royalties point of view, but what’s at risk is the country’s environment…If they don’t do things properly, we’d prefer not to have this money and they have to learnt that Colombia must be respected.”