Driving in Medellin – Tips for Foreigners 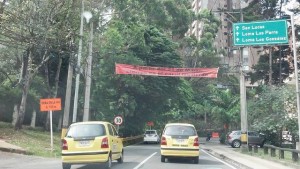 After driving in Medellin for six years I finally decided to share my observations and experiences with others who are either driving in Colombia’s second largest city or considering doing so. It is not third world driving here but it is a different world. Perhaps I can save some headaches and frustration for some people. And very importantly I would be interested to see if others share my same opinions.

It was September 2007 that I first drove a car in Medellin. A friend had loaned me his “beater” and I drove on a Sunday when it was quiet and took the plunge bravely driving from El Poblado to El Centro and back. It was somewhat exciting but immediately obvious that driving here is different from driving in the United States.

As I started to venture out more a number of things hit me. The motor cycles here are crazy and aggressive. They pass on both sides, zip in and out, come down the middle, and follow no laws other than stopping at red lights some of the time. So the first lesson is to stay in your lane and when you move out of it, do not trust your mirrors, look into your turns so you can spot the motor cycle in your blind spot.

The next observation is that busses in Medellin are bullies. They know they are bigger than you and they know that you will back off. So this is a battle you cannot win and should be prepared to lose when they decide to pull out in front of you or suddenly stop and block you. Closely followed in terms of annoyance are the taxis who also will stop anywhere for any reason not seeming to care that they are blocking you. But on occasion I do find considerate taxis so this is not a universal condemnation of our yellow colored friends.

Keeping all this in mind we must address the sign situation or lack thereof. Point here is that you need to know your way around. Otherwise you may find yourself missing a possible turn and it could take you 15 minutes or more to get back to where you were. There are lots of one way streets here and some of them are poorly marked. You do not know you are going the wrong way until you see the oncoming cars flashing their lights at you and gesturing with their hands.

The drivers in general in Medellin I find to be more Type A drivers as opposed to the more docile senior drivers in Florida where I most recently came from. I like the drivers here. Controlled aggressive, alert but very patient. And many are quite polite in letting you out of a driveway or side street. I think it is a carryover of the Paisa culture and I find them more considerate in this regards than the average US driver. And of course their patience is learned from all of the long lines they stand in at banks and government offices. I am often amazed that I am the only one reading a book in line while everybody else is just patiently standing there.

The next thing to keep in mind is the transit police, or “Transito.” These are the guys and gals nattily attired in their well pressed blue uniforms as opposed to the police in their drab military uniforms. Be well aware that the police are your friends and are out to catch criminals and not hassle you regarding your possible driving violations. The Transito are the enemy on the road. They will give you an expensive ticket for parking (my last one was a simple parking ticket costing $125 USD), talking on your cell phone (I have Bluetooth now), not wearing your seat belt, Pico y Placa violations (every six months Pico y Placa is announced for your license plates ending in a certain number and you cannot drive two days a week from 7:00-8:30AM in the morning and 5:30 to 7:00 PM in the evening) and DUI’s.

And keep in mind also that if you have an accident, you should not move your car even if it is in the middle of the road. The Transito will be there shortly and they want to see the original accident scene.

One new wrinkle here is the camera towers that are scattered over town and take photos for moving violations and Pico y Placa. You need to learn where these towers are. My only camera ticket was while I was heading to the airport on Las Palmas and it cost me $240 USD. They send you your ticket in the mail. Ouch!

Finally you will be relieved to know there are no radar traps here. And why? Because of the “policias” which are huge speed bumps that require slowing down. They are all over town and some are not particularly well marked. For the newbie, he will soon learn where these are or risk losing his rear end and transmission.

Traffic in El Poblado and many parts of Medellin can be bad during rush hour and even worse during lunch hour. You need to learn the short cuts and plan your meetings accordingly.

Not really. I do it because of my real estate work. But you can really get around very easily without a car. You can go to most places in and around El Poblado by taxi for $2.50 to $4.00 USD or all over town for $5-10 USD. And the taxis are everywhere. Buses are also everywhere and cover the entire city at all hours for about $0.80-90 USD.

And then the Metro covers the entire city from North to South and also visits certain parts going East and West for a cost of about $0.80-1.00 USD. If you do decide to drive you can only do so for 2-3 months after you enter the country with your foreign license and then you will need to get a local driver’s license. That can be done in a couple hours for a cost of about $60 USD.

But if you are going to drive do us all a favor. Do not be an “Ugly American”. Be considerate and patient. Let the Paisas out of a side street or parking space. They will see that you are an “extranjero” and they will remember that moment of consideration and they will tell their friends, “el gringo era muy amable por la calle ayer.” Just flash your lights and he will know to enter. And that light could be the same light that he keeps in his heart believing he is glad the Americans are in his city and that their compassion and consideration is much like his own.