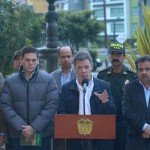 Santos asked his defense minister and police officials “not to let their guard down , not even one centimeter,” at a security council meeting in the southwestern state of Nariño.

The president encouraged the security forces to keep up their military offensive in Nariño which allegedly led to the killing of two suspected guerrillas, the arrest of five and the surrender of five more in other parts of the country in the past 24 hours.

“The military offense here has to confront all kinds of illegal groups,” Santos said, addressing that the region of Narino is one of the most affected by drug-trafficking leftist rebel groups and right-wing neo-paramilitaries.

Nariño has become an iconic example of the direct impact that drug trafficking and the armed conflict have on Colombia’s population.