Domestic air travel in Colombia takes off: up nearly 20% in 1 year 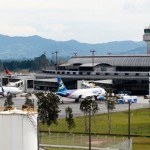 Total passengers carried reached 21.1 million for the period between January and September this year, in a nation of 47 million people.

The 19.6% growth in domestic traffic compared to the same period in 2012 coincided with a 14% increase in international passengers, said the report from Civil Aeronautics.

While Bogota had the most passengers at 18.4 million, the real domestic growth was in the regions. Medellin, Colombia’s second city, stood out with a 40% year-on-year increase. The tourist hubs of Cartagena, Cali and Barranquilla recorded growth of 26% 22% and 14% respectively.

A similar growth in household income and hotel figures point to a positive outlook for the Colombian economy in 2014, said Portafolio magazine.

The trend in air travel could come in part due to new infrastructure.  In the past year, El Dorado, Bogota’s main airport has opened new international and domestic terminals.

The boost also lifted the fortunes of Colombian flag carrier Avianca, who carry 55% of domestic traffic. They recently debuted on the New York Stock Exchange, raising $409 million in pre-float sales.

The post Domestic air travel in Colombia takes off: up nearly 20% in 1 year appeared first on Colombia News | Colombia Reports.