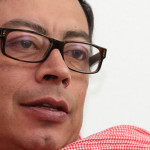 Dismissed Bogota Mayor Gustavo Petro on Monday called for peaceful protest against his removal from office. He qualified the measure as a coup.

Petro, 53, was removed from office after the Colombian inspector general ruled that the mayor consciously allowed  irregularities to occur in the implementation of a reform of the capital city’s trash collection.

The Bogota mayor was dismissed and will not be able to hold  public office for 15 years.

According to Petro, the decision of Inspector General Alejandro Ordoñez constitutes a coup. He called on residents of Bogota in Colombia to take to the streets and protest the ruling.

“We are facing a coup against the progressive government in the city of Bogota,” Petro said on his twitter account where he asked the international community for solidarity.

A few hundred supporters of the dismissed mayor took to Bogota’s central Bolivar Square to voice their nonconformity with the inspector general’s decision.

Colombian President Juan Manual Santos sent out a press release in which he said to respect the dismissal, but said to “regret the inconveniences this situation may cause for the citizens.”

The president  additionally called on protesters to maintain calm.