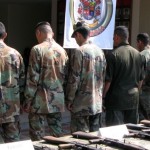 The vast majority of deserted or demobilized former members of Colombia’s guerrilla and paramilitary groups are satisfied with government attempt to reintegrate them, the state agency responsible for reintegration said.

A poll held by the government agency among its beneficiaries showed that some 80% of former fighters are either satisfied or very satisfied about their reintegration into civil society.

Some 90% of the 1,307 polled ex-combatants said their quality of life had increased after abandoning the ranks of their illegal armed group.

The Colombian Agency for Reintegration, or ACR, currently has 29,500 former combatants taking part in a reintegration process. Approximately 60% of them are former members of the now-defunct paramilitary organization AUC and groups that emerged from it. The remaining 40% are from still-active guerrilla groups like the FARC and ELN.

Among those who were polled, 71% said to be holding a job.

Of those having found a job after having deserted their illegal armed group, 20% said to have found a job in construction. Other common sectors for reintegrated fighters are agriculture, private security, retail and livestock.

Only 6% said to have informal employment, for example driving motortaxis or selling cell phone minutes.

Some 25% of those interviewed indicated they feel discriminated by society for their enrollment in illegal armed groups. The interviewees indicated that this is mostly apparent when trying to make new friends or applying for jobs.

The ACR is currently making preparations for the possible reintegration of some 30,000 demobilization of rebel fighters in the event the FARC and ELN reach agreement with the government about ending the almost 50-year armed conflict between leftist rebel groups and the state.

The FARC is in the middle of formal dialogue with government delegates while the ELN is waiting for the government to agree to talks.