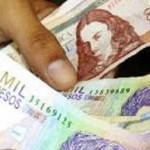 Discussions over next year’s increase rate for Colombia’s minimum wage started Monday and will continue through the week. According to local media, the Minister of Labor said not to expect an increase of over 4% for 2014.

Unions called the 2013 rise “miserable” and that along with tax changes introduced in 2013 the minimal wage increase would lead to increasing inequality in Colombia.

Meanwhile employers, who had initially asked for an increase of 3.5%, were satisfied with increase.