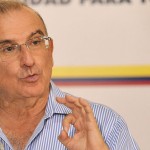 The government’s chief negotiator praised a new “opening for democracy,”  after peace negotiators on Tuesday signed a “fundamental” agreement creating a path for rebel group FARC to enter into Colombia’s democratic institutions.

Humberto de la Calle has been working since November of last year to broker a peace deal with the FARC to end Colombia’s 50 year civil conflict. The accord is the second of six preliminary pacts necessary to end almost 50 years of violence between rebels and state.

Although negotiators from both sides assured the significance of the agreement, which had stalled the peace talks for months, the specific details have yet to be released.

In a declaration, de la Calle said that “the agreement today represents a new opening for democracy, an open road for peace to take root after the end of the conflict… to free our government from violence and intimidation.”

He said the agreement would create an “important mechanism, turning armed groups into political parties and movements,” which would act for the “betterment of the electorate system” as it “awakened the voice and possibilities of democratic expression in regions” that had suffered during the violence between the government and the rebels.

According to his statement, in the “next few days” negotiators would release a more details on the agreement.

“We invite all Colombians to participate in this process with proposals, criticisms, opinions and your support. The channels of participation are open,” said de la Calle. “We have the opportunity to generate a culture of coexistence, tolerance and respect, to afford our politics with security and dignify the exercise of politics.”

“We can now reach our great national dream.”