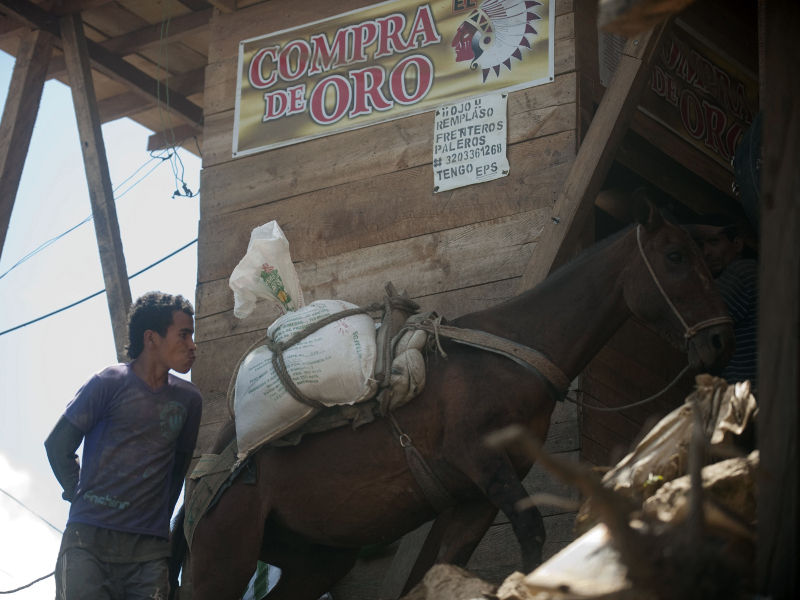 In October 2012, Colombian President Juan Manuel Santos announced the Colombian government would invest $30 billion Colombian pesos (US$16.7 million) to formalize the mining industry in which more than half of all mines nationwide are unlicensed. (Raúl Arboleda/AFP)

(INFOSURHOY) SAN ANTONIO, Colombia – Hernán Pineda risks his life daily digging for gold, toiling in a dangerous, unlicensed mine in Colombia, in a crude settlement that has sprung up in a sort of modern-day gold rush.

Many in San Antonio, located in the country’s northwest, live in shacks made of plastic or wood.Colombia has more than 14,000 mines, 56% of which are unlicensed, according to the government.

From January 2012 to June of this year, 86 people died in mining accidents and 39 were injured, according to the Ministry of Mines and Energy.

But this hidden wealth also has drawn interest from the Revolutionary Armed Forces of Colombia (FARC) and other illegal armed groups. 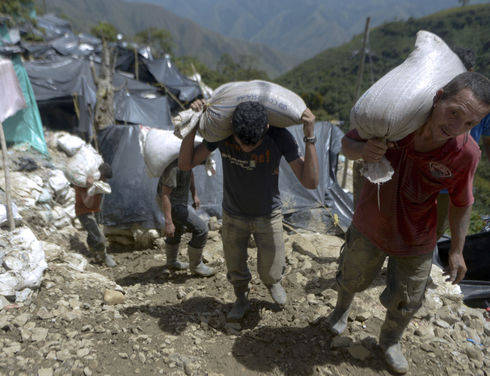 Miners carry sacks of gold extracted from an illegal mine in the village of San Antonio in the department of Antioquia. (Raúl Arboleda/AFP)

The mining industry is considered one of the engines of growth in Colombia, accounting for a little more than 2% of the gross domestic product, according to the Colombian Mining Information System.

Coal accounts for much of the total, but the output from gold mines continues to grow. Between July and September 2012, about 18 metric tons of gold were produced in Colombia – 23.77% more than during the same period in 2011.

In addition to being highly lucrative, illegal gold mining has other advantages over drug trafficking, a main source of revenue for the FARC, the National Liberation Army (ELN) and criminal groups (BACRIM).

“If one of these groups operating on the margins of the law grows illegal crops, it is immediately committing a serious crime and exposing itself to extradition [to the United States]. That’s not the case with gold,” said Leonardo Güiza Suárez, a research professor specializing in mining and human rights issues at Colombia’s University of Rosario. “Gold is much easier to transport and it’s an economic activity that’s less persecuted.”

Jeremy McDermott, the co-director of InSight Crime, a consulting firm that researches and analyzes organized crime in Latin America and the Caribbean, said illegal mining is a major funding source for the FARC in some areas of the Andean nation.

“In Antioquia, Chocó and Córdoba, gold may account for 40% to 50% of the FARC’s funds, while farther south, where there isn’t as much gold, it may represent only 5%,” he added.

McDermott added that in the Bajo Cauca region in the department of Antioquia, for each of the approximately 1,000 backhoes used for gold mining, illegal armed groups receive monthly payments of anywhere from $3 million to $12 million Colombian pesos (US$1,674 – US$6,696).

“Speaking conservatively, in this area alone, the FARC, the BACRIM and the ELN are earning $4 billion Colombian pesos (US$2.2 million), which means that gold is more profitable than drug trafficking in this region,” McDermott said.

Pineda, a 40-year-old father of eight, is one of 4,000 people, including women and children, who work scratching gold out of the side of a mountain in the department of Antioquia.

He has worked in illegal mines since he was 13. In San Antonio, he started off earning a percentage of what he mined each day. His job is to set off detonations to loosen earth, set up reinforcing beams to try to make things safe, and direct a 20-miner team.

But Pineda said he is under no illusions. The job is dangerous, and he said his working life will be short because of the precarious safety conditions in the mines.

“It is always this way in illegal mining. The idea is to get as much as you can, and with people trying to mine more and do it faster and faster, it is chaotic,” Pineda said.

However, Colombian authorities have declared the zone dangerous and plan to get the miners out.

“It is an area with a lot of seismic activity. It is steep and has geological faults. The more people work the mountain, the weaker it gets and there is a greater risk of landslides,” said César Hernández, Antioquia’s risk management director.

The settlements that have sprung up in San Antonio have no water management infrastructure so the earth is soaked and that makes thing worse, he added.

After 27 years working down in the earth’s bowels, Pineda says he has witnessed every kind of accident and seen colleagues killed, blinded or crippled.

Pineda says he himself has serious lung problems. Now that he has turned 40, he is considering giving up mining and going to work in a store he bought in Medellín with money he has earned.

Agence France-Presse contributed to this report.