Cuban doctors arrive in Panama to attend Covid-19 crisis, despite warnings from the U.S.

TODAY PANAMA – A group of 220 Cuban health workers arrived in Panama, despite calls from the United States not to hire them. 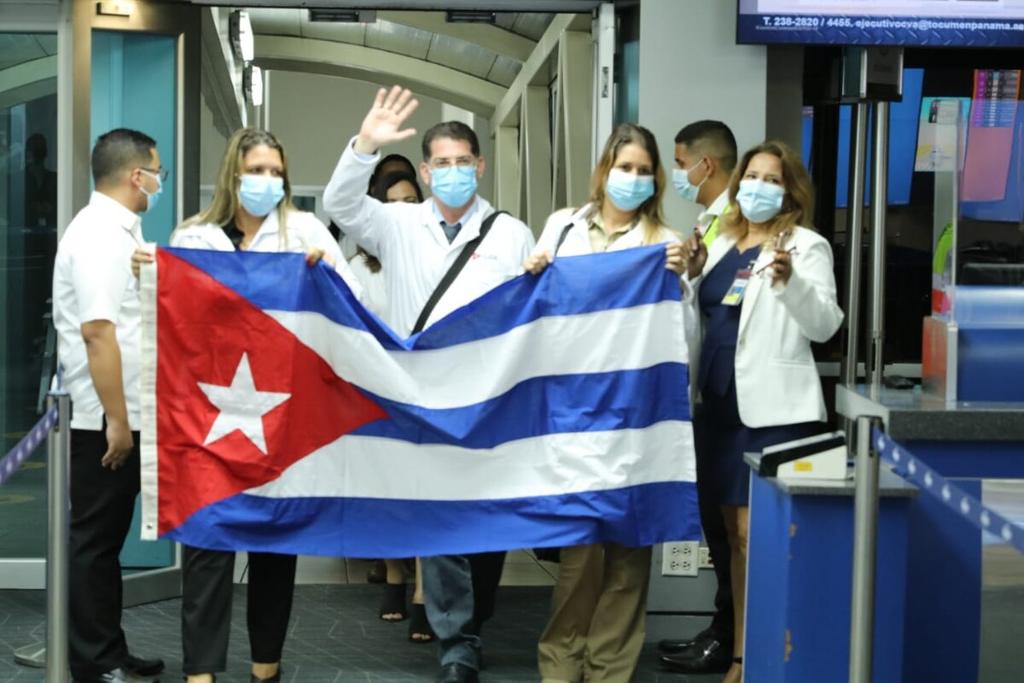 The U.S. government considers the sale of Cuban medical services as “a government pattern of forced labor, which serves as propaganda for the communist government of the island.”

The announcement was made official, this Thursday, by the Panamanian Minister of Health, Luis Francisco Sucre, in the midst of the crisis that Central American country is going through due to a rebound in cases and deaths from covid-19.

“Medical reinforcement comes to the health system with the aim of contributing to the high demand in our hospitals,” Sucre said.

The Cuban Embassy in Panama celebrated the arrival of its “heroes in white coats”, what Cuban authorities call these missions.

“They are 100% specialists from different areas of intensive care, internal medicine, pulmonology, cardiology and respiratory therapy. In addition, there are specialists to support nursing,” explained the advisor to the Ministry of Health, Alessandro Ganci.

Related: Ministry of Health of Panama misinforms about vaccines purchased by Costa Rica

The Government of Panama announced, on December 15, the hiring of doctors from Cuba, the United States, Mexico, Venezuela and Colombia to face their complicated epidemiological situation due to covid-19.

With 4.2 million inhabitants, Panama has the highest number of infections from the pandemic in all of Central America. As of December 23, Panama has accumulated 223,674 infections of covid-19 and 3,715 deaths.

After reopening most of its economic activities between September and October, the country is in full growth, with 40,000 new infections and half a thousand deaths in 18 days.

The situation has caused the saturation of hospitals and the exhaustion of health personnel.

The government had to set up tents on the outskirts of several hospitals and set up gyms and a convention center to care for the sick, while it expects to receive some 450,000 doses of the Pfizer vaccine in the first quarter of 2021.

“The authorities have made the most reasonable and logical decision, here the matter is not ideological, if not to see in what way we give the best management” to the pandemic, Domingo Moreno, coordinator of the main Panamanian medical union, told AFP.

“Everything possible was done to contain and mitigate the spread (of the virus)”, but “the cases have exceeded us” and “we do not have the necessary human resources,” he added.

However, the decision to bring foreign doctors is controversial in Panama, where the practice of medicine and nursing is exclusively for local professionals.

The dean of the Faculty of Medicine of the University of Panama, Enrique Mendoza, resigned as a member of the advisory council that advises the government, rejecting the decision, according to the newspaper La Prensa.

“I have been consistent in my position that foreign citizens who do not comply with the laws of the Republic should not be allowed to practice medicine,” Mendoza said in his resignation letter.

The United States, Panama’s main political and economic partner, had warned about the arrival of the Cuban doctors in the country.

“Most likely there will be repercussions, at least while (Donald) Trump is in power. Under his administration, the United States has expressed its opposition to this type of collaboration between the Cuban government and other countries,” Carlos Guevara-Mann, director of the Master’s in International Affairs at Florida State University, told AFP.

“Policy under Biden is likely to be more tolerant of that kind of cooperation with Cuba,” he added.

“There will surely be a wake-up call (from the Trump administration) because they have already done it once, but without major repercussions, because the US government is going to change,” a diplomatic source told AFP.

“The governments that hire Cuban health professionals must guarantee their fair and humane treatment, in contrast to the Castro regime that traffics and exploits their bravery for their benefit,” said the Acting Undersecretary of State for the Western Hemisphere, Michael Kozak, recently.

“Contracts must be transparent and payments must go directly to workers,” Kozak said.

Panamanian President Laurentino Cortizo announced in August his intention to hire Cuban doctors, but withdrew after receiving local criticism and a visit from senior US officials. However, the situation of the pandemic made the Government change its mind.

Since coming to power in 2019, Cortizo has privileged relations with the United States, the main user of the Panama Canal, over China, which had gained ground after the establishment of diplomatic relations in 2017.