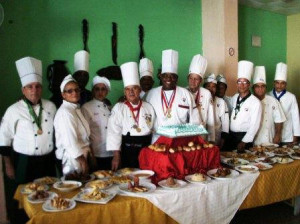 The Federation of Culinary Associations of the Republic of Cuba and the Cocinarte Academy of Gastronomy in Santiago de Cali, Colombia, signed an agreement to build closer ties and collaboration.

Eddy Fernandez, president of the Cuban federation said today that the agreement seeks to deepen the friendship between the two organizations.

The agreement was signed this week at Artechef, a teaching restaurant in the Cuban capital, and was attended by Colombian Ambassador Gustavo Bell Lemus, and the rector of Cocinarte, Julio Alberto Mojica.