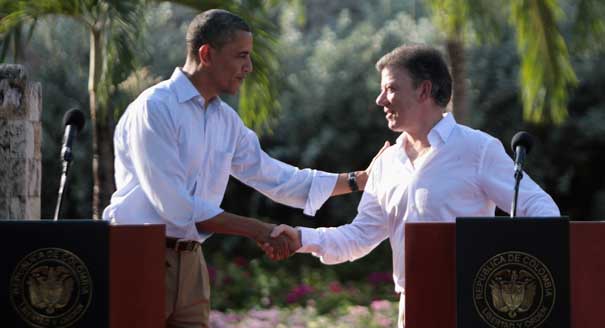 Last Friday, December 6, nongovernmental organizations such as Oxfam and Planeta Paz presented their latest evaluation on the Free Trade Agreement (FTA) between Colombia and United States — implemented in May, 2012. Their conclusion was simple: Colombia lost, while the United States won.

This is not new. Since the FTA negotiations began, the same arguments against this treaty have come from the same voices; and they are still being repeated, despite several debates and rebuttals over this topic. Maybe this article can prove how their statements are built on fallacious arguments.

In this report, there are at least three incorrect notions. The first one is the time frame, over which the analysis was made. The report makes its conclusions after a nine-month period with the FTA in force. This fails to take into consideration the long-term trends or the particular circumstances of a broader economic downturn in Latin America.

Besides, this short timeframe completely ignores that the adjustment process for new conditions, generated by this treaty, depends on many economic agents, and their decisions require consideration and time. The FTA is an instrument of commercial exchange, set up to last not months or years, but decades.

Moreover, this misconception in terms of immediate results overlooks the impoverished situation for Colombia and its farmers before the FTA. Was Colombia a developed country and stopped being one because of its commercial agreements with United States? Were there farmers living in wealth and luxury before the FTA?

The second incorrect notion stems from mishandling of economic proportions. According to the conclusions released through several Colombian media outlets, the agricultural sector has been the main loser in this treaty. If this were true, we would be talking of a sector which doesn’t even represent — according to data from Colombia’s central bank — 6 percent of the total economic activity in the nation. Do the rest of the economic sectors have to be sacrificed to protect 6 percent of the economy, as it may suffer losses or economic instability in the short term?

But it’s not even the agricultural sector at large that is being threatened. The authors of this report indicate that the most affected groups are the whey, white corn, powdered milk, and pork industries. If the losses are clearly concentrated in a few minor sectors, upon which a small number of families depend — as this very report reveals — a conclusion that the whole country lost is inconceivable.

By choosing the alarmist route instead of going through an accurate analysis, other deep-rooted problems emerge. According to this report, these supposed losses can be seen in price decreases for products such rice and dairy. In fact, the authors point out that these products are part of Colombians’ basic food basket.

If that’s the case, identifying the above — cheaper food items — as a negative effect of the FTA is inhumane, to say the least. It’s inhumane to condemn the decrease on prices of basic consumption goods in a country that, in 2012, according to the Department of National Planning (and yes, in Colombia we still have one of those), had poverty levels of 32.7 percent and extreme poverty of 10.4 percent. And it gets worse when the report bases its conclusion on Colombia’s countryside, where the indicators are 46.8 percent and 22.8 percent, respectively. When prices are reduced, the main beneficiaries are precisely the poorest among us.

The erroneous conclusions stated in this report are simultaneously the result of an underlying misconception. This one is recurrent and serious: the contempt for and misunderstanding of profit. Critics of free trade forget that voluntary exchange achieves an objective; it better satisfies the needs and wishes of economic agents. This has been proved in economics for centuries, by authors like Carl Menger.

Nonetheless, the report completely disregards this reality and focuses its analysis on the approach of classic mercantilism. In other words, profits are only positive when they come from our exports, while imports and profits to others must hurt us. This us-versus-them confusion is why they conclude that Colombia is the one who lost, because her exports to the United States haven’t risen as much as her imports from the United States.

The report includes many other mistakes one could respond to, but I shall focus the critics’ use of doomsday-like contentions. That they get away with it shows how little we have advanced in understanding social phenomena.

While voluntary trade is a human activity that is mutually beneficial to the participating parties, of course there will be certain sectors adversely affected in a competitive, market economy. One might even make the case that these sectors should be compensated for their losses, but this debate has not even started. Rather, we continue to hear the same misconceptions, repeated as mantras.

Colombia needs to elevate and move the focus of the debate, if we want to progress.