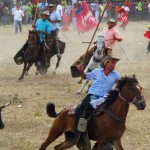 Colombia’s State Council ruled Tuesday that, contrary to a municipal cancellation of next January’s event in a northern Colombian town, popular “Corralejas” bull fighting cannot be banned according to the country’s constitution.

According to local media Caracol Radio, the ruling was explained as declaring constitutional a 1985 law giving permission to hold the bull fighting along with the other late-January celebrations of the Caribbean coasts.

“Without a change in the law, the cultural events cannot be suspended or prohibited as covered by the Constitution,” said the court ruling.

According to the ruling the mayors can only regulate the bull fighting if the animals are hurt “in their integrity,” but in any case, the events cannot be banned.

The Corralejas are a traditional rural festival that takes place every year throughout northern Colombia. At the events, thousands of spectators watch as open-entry participants attempt to outrun serious injury and death brought on the horns of rampaging bulls. The participant confuse and derange the bulls by waving flags and piercing the animal’s back with spears.