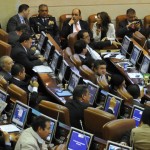 In 1991, it would have taken 14 years for a Colombian making minimum wage to earn the same amount of money as his or her congressional representative made in a single year. Today, it would take over 40.

Less than 2 million workers are currently employed under minimum wage laws in Colombia, but many more in informal labor situations make less, without the guaranteed benefits provided for by Colombian labor laws.

Both congressional salaries and minimum wages have been under fire in the news this past year.  Congress had been fighting to raise their salary for months until President Juan Manuel Santos finally “appeased” them by including a $4,000+ premium.

Citizens and opposition politicians alike have long been upset about the amount of privileges congressmen get in terms of tax breaks, premiums, and preferential treatment for family members.

Former president Alvaro Uribe spoke out against this behavior: “It is time Congress members to renounce unnecessary and unjustified privileges.”

On the other front, both unions and employers tried to stop minimum wage increases earlier this year. Union representatives had said that the proposed — and eventually passed — increase of $.43 was “an insult to the working class of the country.” Employers meanwhile had tried to lower the increase to less than $.40.